Extratropical cyclones, or winter storms, can travel through vast areas in a span of a few hours. While extratropical cyclone (ETC) wind speeds seldom reach those of major tropical hurricanes, the large size of these storms and their relative frequency create the potential for widespread and recurrent insured losses. ETCs can be considered as an important driver of catastrophe losses in both North Atlantic and North Pacific and in the coastal zones.

The winds inside ETC, as the largest source of momentum for the ocean surface, affect the full range of ocean movement, from individual surface waves to complete current systems. Winds along the ocean surface regulate interaction between the atmosphere and the ocean via modulation of the air-sea exchanges of heat, moisture, gases, and particulates. Only remote sensing allows for wind measurements to be made systematically over the vast ocean areas.

The operational use of satellite ocean surface wind observations has advanced considerably over the past decade. Satellite passive and active microwave instruments are capable to measure sea surface winds independently on day time and clouds. At the same time, precipitation and high winds influence differently on the ability of sensors to provide wind estimates of high accuracy. Today the WindSat radiometer and ASCAT and OceanSat scatterometer wind observation data are utilized daily by operational weather forecast and warning centers around the world.

On 18 May 2012 new Japan GCOM-W1 satellite with AMSR2 scanning multichannel radiometer with the largest in the world rotating antenna was launched and in January 2013 calibrated radiometric data of unprecedented spatial resolution were made already available for the scientific community. In this study GCOM-W1 AMSR2 sea surface wind speed (SSWS) estimates in the winter extratropical cyclones over the Northern Atlantic and Northern Pacific Oceans are compared with those of Metop-A, -B ASCAT. AMSR2 SSWS are obtained with new Neural Network and physical-based algorithms developed on the ensemble of simulated brightness temperature Tb data. Weather filter, based on atmospheric absorption at 10.7 GHz also estimated from Tb data, is applied to mask areas of the enhanced absorption caused by heavy clouds and precipitation/. Application of this filter to AMSR2 data allowed retrieving SSWS in the significantly broader zones of high winds masked by one based on polarization difference of brightness temperatures at 36.5 GHz usually used in the retrieval geophysical algorithms. Comparison of ASCAT and AMSR2 SSWS showed good agreement over the wind speeds up to 35 m/s. Example of the comparison of Metop-A ASCAT (a) and AMSR2 SSWS (b) for the Extratropical cyclone over the Northern Atlantic 29 January 2013 is shown in Fig.1. 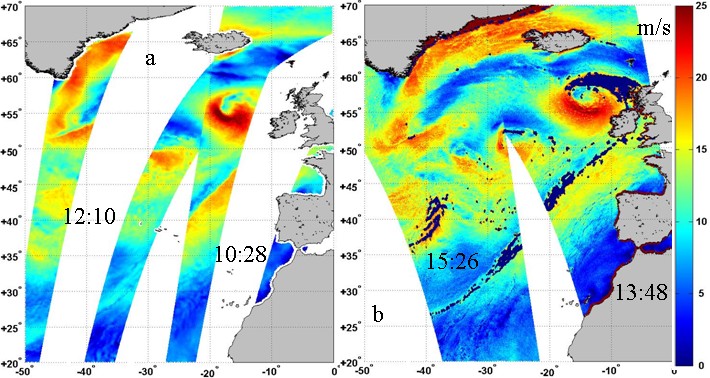