Swarm is the next Earth Explorer mission in ESA's Living Planet Programme scheduled for launch in summer 2013. The objective of the Swarm mission is to provide the best ever survey of the geomagnetic field and its temporal evolution. The mission shall deliver data that aim to provide new insights into the Earth system by improving our understanding of the Earth’s interior and near-Earth electro-magnetic environment including space weather. Swarm consists of a constellation of three identical satellites.
Initially all satellites are released from a single launcher and satellite manoeuvring during the commissioning phase of the mission results in the specified constellation at the beginning of the operational phase. This consists of a side-by-side flying pair of satellites at an initial altitude of about 460 km and thereafter slowly decaying. These are complemented by a third satellite that starts in an orbit at 530 km altitude that drifts away from the lower pair over time. High-precision and high-resolution measurements of the strength, direction and variation of the magnetic field, complemented by precise navigation, accelerometer and electric field measurements, will provide the observations that are required to separate and model various sources of the geomagnetic field (core, mantle, lithosphere) and near-Earth current systems (ionosphere, magnetosphere). The actual mission status will be the main focus during the presentation. 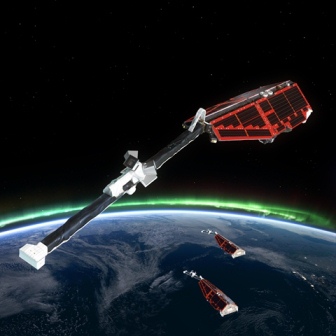