The aim of this paper is to describe the activities related to the project "ISAR mode for COSMO Skymed System with Super-resolution Options (ICOSSOP)" funded by the Italian Space Agency (ASI) under the framework of the first Announcement of Opportunity (AO) for the Exploitation of COMO Skymed data. The project took two years and was carried out by two Italian Universities, namely the University of Pisa (Department of Information Engineering, Radar Laboratory), as principal investigator, and the University of Rome "La Sapienza" (Department DIET). The team was composed of full and associate professors, researchers and PhD students, who worked actively for the success of the project, under the careful supervision of the ASI. The project has proposed an innovative use of COSMO-Skymed data and specifically the development of an ISAR mode with super-resolution options for COSMO-SkyMed system. The goal was to reconstruct high resolution and well focussed ISAR images of moving targets extracted from a SAR scene. Several experimental activities have been led with international research institutions. The success of the project has also been confirmed by the publication of several high quality scientific papers[1], [2], [3], [5].

SAR systems, such as COSMO-SkyMed system, were originally employed in earth observation applications. Nevertheless, the ability to form high-resolution images has also rapidly made SAR systems very attractive for both military and homeland security applications. In such applications, radar imaging of man-made non-cooperative targets (NCTRI) becomes the main interest rather than the observation of natural phenomena.

Nevertheless SAR processors are based on the assumption that the illuminated area is static during the synthetic aperture formation. As a consequence of such an assumption, standard SAR techniques are typically unable to focus moving targets while forming a focussed image of the static scene. This leads to blurred and displaced images of any object that is not static during the synthetic aperture formation.

In this study the problem was addressed as a problem of non-cooperative target imaging and a solution based on the use of Inverse Synthetic Aperture Radar (ISAR) processing was proposed to solve this problem. ISAR techniques, in fact, do not base their functioning on the assumption that the target is static during the synthetic aperture formation, but instead they entirely exploit the target's own motions to form the synthetic aperture. Taking into account the advantages of the COSMO-SkyMed system (wide areas monitoring, short revisit time, etc...), the problem was tackled starting from formed SAR images.

The overall system concept is sketched in Figure 1. Figure 2-(b) shows an ISAR image obtained by applying the proposed method to the defocused target's SAR image shown in Figure 2-(a).

It must be pointed out that, although the focus in our study was on the space-borne imaging of maritime targets, the overall concept could also be applied to ground and air moving targets as well as to other radar platforms, such as manned or unmanned airborne radar systems[4]. In the full paper details concerning the whole proposed algorithm will be provided.

Specifically a measurement campaign was conducted in collaboration with the Council for Scientific and Industrial Research (CSIR-South Africa). COSMO-SkyMed measurements were taken in False Bay, near Cape Town, South Africa in October 2010. The scenario was a typical coastal maritime surveillance. The target, shown in Figure 3, was a small sailing ship equipped with a GSP system to continuously monitor its position and a differential GPS system to measure its own rotational motions induced by the sea waves. 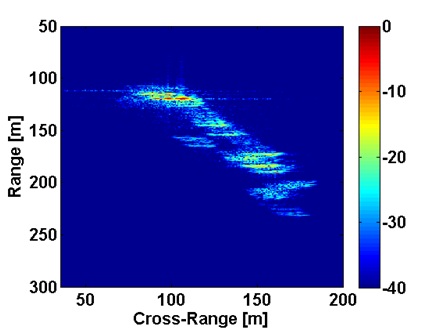 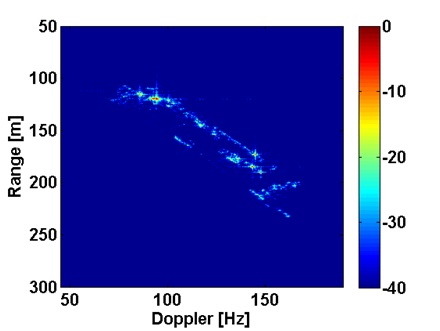 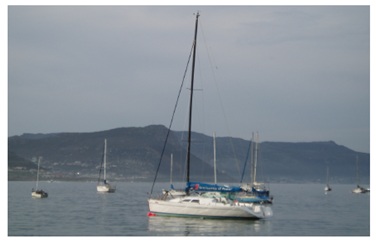 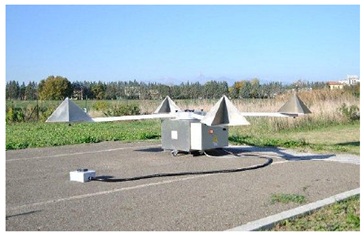