We present here results that strongly support the use of NIR-red algorithms, developed based on the spectral channels of MERIS, as standard tools for estimating chlorophyll-a (chl-a) concentration in turbid productive waters. The study was carried out as one of the steps in testing the potential of the universal applicability of previously developed NIR-red algorithms, which were originally calibrated using a limited set of MERIS imagery and in situ data from the Azov Sea and the Taganrog Bay, Russia, and data that were synthetically generated using a radiative transfer model. We used an extensive set of MERIS imagery and in situ data collected between 2008 and 2010 in the Azov Sea and the Taganrog Bay for this validation task. We found that the NIR-red algorithms gave consistent, highly accurate estimates of chl-a concentration, with the root mean square error as low as 5.92 mg m-3 for the two-band algorithm and 5.91 mg m-3 for the three-band algorithm; the in situ chl-a concentrations ranged from 1.09 mg m-3 to 107.82 mg m-3. This obviates the need for case-specific reparameterization of the MERIS-based algorithms, provided that the specific absorption coefficient of phytoplankton in the water does not change drastically, and presents a strong case for the use of NIR-red algorithms as standard algorithms that can be routinely applied for near-real-time quantitative monitoring of chl-a concentration in the Azov Sea and the Taganrog Bay, and potentially elsewhere, which will be a real boon to ecologists, natural resource managers and environmental decision-makers. The NIR-red algorithms were also applied to a series of images acquired by the spaceborne hyperspectral sensor HICO over the Taganrog Bay in 2012 after the demise of MERIS. The results from this multi-temporal dataset demonstrated the strong potential of HICO as a reliable tool for monitoring coastal water quality, which is especially critical given the recent demise of MERIS. The fine spatial resolution (96 m) of HICO images allows for a detailed analysis of the spatial distribution pattern of chl-a, and the fine spectral resolution (5.7 nm) offers a great potential for distinguishing various phytoplankton species and also estimating the concentrations of accessory pigments in water. HICO presents itself as a suitable alternative tool for continual remote monitoring of the Azov Sea and Taganrog Bay regions and potentially elsewhere until the launch and operation of the Ocean Land Colour Instrument (OLCI) onboard Sentinel-3, which is scheduled to be launched in 2014. OLCI has all of MERIS' spectral bands and the NIR-red algorithms are expected to yield accurate chl-a estimates from OLCI data similar to what has been obtained from MERIS data. 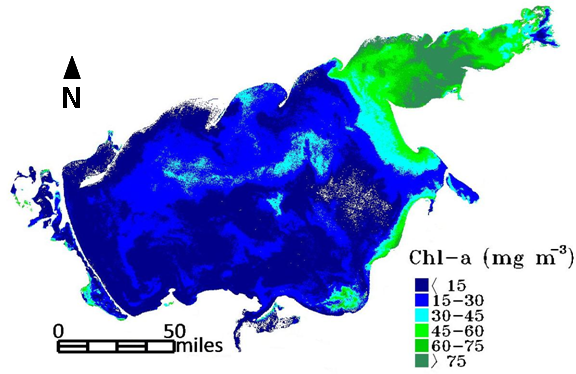 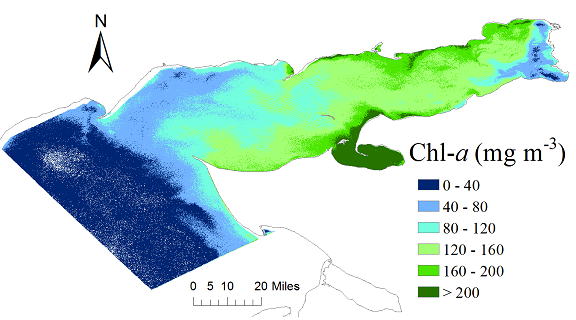