Synthetic Aperture Radar (SAR), with its cloud-penetrating, high resolution day-night operational capability, provides an attractive option for surface current measurement. At intermediate incidence angles (20°-75°), the primary scattering mechanism is Bragg scattering through small-scale surface capillary waves; however long-scale waves also affect the backscatter by influencing the capillary waves through the processes of tilt and hydrodynamic modulation. Biogenic surface slicks associated with fish, upwelling, and phytoplankton blooms generally form monomolecular layers on the sea surface. The effect of these monomolecular slicks is to dampen the surface capillary waves by "Marangoni damping", which in turn reduces the Bragg backscatter. Biogenic surface slicks thus appear in SAR imagery as lower backscatter regions, as compared to the surrounding ocean surface. A few exploratory studies have shown that surface slicks act as passive tracers for advection due to surface currents. Previous work on surface slick feature tracking in SAR imagery for estimation of surface currents has been limited to processing and analysis of relatively small and sporadic datasets, and a concise general technique for the same has not been reported. Comparisons with other datasets have also been scarce.

For most of their mission coincidence time frame (2002 - 2011), ESA's Envisat and ERS-2 remote sensing satellites with onboard C-band SAR instruments remained in a specific orbit configuration where ERS-2 followed Envisat in the same orbit with a time-lag of 30 minutes. This small time-lag with their high spatial resolution makes these SAR sensors a unique resource for measurement of ocean surface currents at the submesoscale to mesoscale time and length scales. In our talk, we'll report the use of the Maximum Cross-Correlation (MCC) method in a semi-automated algorithm with minimal user input to process a large dataset of Envisat-ERS2 30-min lag pairs over coastal regions and generation of surface currents at resolutions of ≈2 km.

The primary geographical area of study is the coastal California Current System (CCS) which is relatively well understood, and its oceanographic characteristics at the meso- and larger scales are well-known. However, to date, many of the developments in submesoscale oceanography in this region have been led by theory and modeling without observational validation. Recent submesoscale simulations in the CCS show that the surface velocity field follows a spectral slope of k-2 that is shallower than that predicted by ordinary quasi-geostrophic (QG) theory (k-3), but steeper than that predicted for surface quasi-geostrophic (SQG) theory (k-5/3). HF radar surface current observations also show agreement with the k-2 spectral slope at submesoscale wavenumbers. The velocity spectra calculated from SAR MCC currents, shown in Fig. 1, agree with this important theoretical and modeled result and follow the the k-2 power law in the wavenumber range of 10-4 rad/m to 10-3 rad/m. This shows that the SAR MCC derived currents depict actual geophysical signals in the CCS.

Further MCC SAR currents are being processed over the US East Coast and results from them will be reported also. 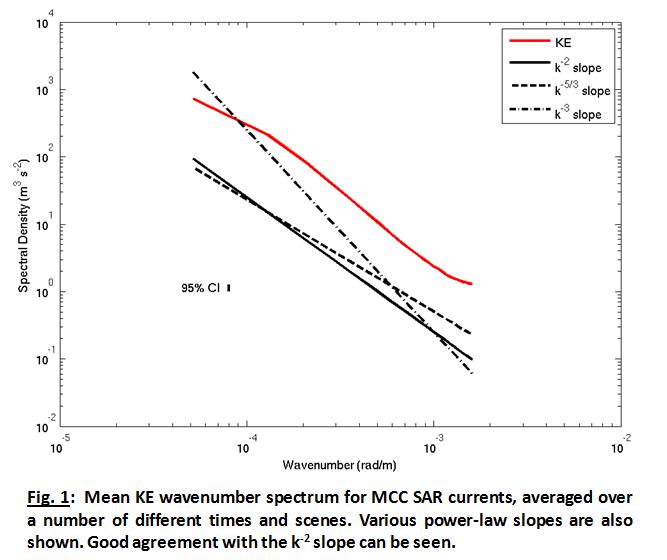