High latitude regions are predicted to suffer much greater warming than lower latitudes as a result of climate change, and this will cause (and is causing) drastic changes in the carbon and water balance of the region, with associated large effects on snow cover, soil freeze-thaw periods, soil moisture, precipitation, permafrost, growing season, land cover (including species changes), thermocat erosion in peat lands, greenhouse gas fluxes and albedo (Drobot et al., 2008; Johannessen, 2008). Of crucial concern are the feedbacks between these land surface processes and climate warming including enhanced input of dissolved and particulate organic matter into the carbon pool in the Arctic; this is recognised as one of the greatest sources of uncertainty in climate prediction (IPCC 2007). The large Arctic rivers are contributors to the carbon pool in the Atlantic which also receives vast amounts of carbon from large equatorial rivers. The latter at the same time spread their waters over large areas and influence ocean and atmospheric processes. Therefore, estimation of carbon flux and freshwater distribution is of importance for studies of both climate change and air-sea interaction. The available data on carbon content from routine water sampling stations are discontinuous and suffer from numerous lacunas. Estimation of DOC from optical remote sensing data is also limited in high latitudes due to cloudiness and low sun angle. Thus, new technologies based on synergistic use of optical and microwave remote sensing data are to be developed for efficient monitoring of fresh water discharge and DOC fluxes. DOC is a conservative admixture in riverine waters and therefore a linear relationship between DOC concentration and sea surface salinity in the plumes of large rivers can be established. Thus for detailed investigation of riverine DOC fluxes into the Arctic Ocean we utilize optical remote sensing data in combination with data from Soil Moisture and Ocean Salinity (SMOS). SMOS mission is the second Earth Explorer of ESA in orbit successfully launched in November 2009 (www.esa.int). SMOS makes global observations of sea-surface salinity (SSS) over the oceans at spatial resolution of about ~ 35 km at diurnal or semidiurnal temporal resolution in the Arctic. Operation in the L-band (1.4 GHz) is designed for retrieval of sea surface salinity with enough high accuracy and at high temporal resolution. In our study we have employed microwave remote sensing data from SMOS together with optical remote sensing data from MEIRS and MODIS/Aqua satellite sensors for comparative study of dilution processes in the plumes of Ob, Yenisey, Lena, McKenzie and Amazon rivers. Sea surface salinity (SSS) derived from microwave satellite data was compared to concentrations of dissolved organic carbon (DOC) derived from optical data. The SMOS data over the North Atlantic and Nordic Seas (60W - 20E, 40N - 80N) have been acquired from the ESA FTP server on a regular basis at the Nansen Center since beginning of 2011. The Level2 data comprising values of the sea surface salinity (SSS), the sea surface temperature (SST) and the near surface wind speed (W) were read from SMOS files with the Matlab RWAPI toolbox and re-projected on a regular grid with NERSC software. Monthly composites of SSS, SST and W were then generated for the period March 2011 - February 2012. These fields have, in turn, been compared to SST and SSS fields derived from the TOPAZ coupled ocean and sea ice modeling and data assimilation system run at the Nansen Center. The modeled SST and SSS fields were computed as monthly climatology values from the TOPAZ reanalysis data for 2003 - 2008. The analysis shows that the SSS values are contaminated with large fraction of noise that has to be flagged and removed. In particular, the SSS retrieval error is seen to be very high in the Norwegian, Greenland and Barents Seas. This is a consequence of both the low SST as well as the unfortunate frequency interference problem. All in all the data coverage in the North East Atlantic and Nordic Seas comprises about ~20% in the spring months and ~30% in the summer months thanks to the gradual seasonal warming of the upper ocean. The NERSC bio-optical retrieval algorithm (BOREALI) algorithm was applied for the first time to retrieve consistent 13 years time series of water quality parameters (chlorophyll, suspended minerals and dissolved organic carbon) in the estuaries of the four largest Arctic rivers: Ob, Yenisey, Lena and Mackenzey. Time series of DOC concentrations in the estuaries of the largest Arctic rivers were built and high correlation was found with river discharge rates. Significant negative trend in DOC in all estuaries suggests that we observe a shift in river functioning potentially related to the climate change. Optical data is applicable for retrieval of SSS only in estuaries of large rivers. Analysis of time series reveal strong dependence on river discharge rates. More SSS measurements (contact or remote) are required for establishing seasonal relations between DOC and SSS and studying dilution processes. A robust relationship between spectral normalized water leaving reflectance (Rrs) and sea surface salinity (SSS) in the Amazon river plume was established using neural network approach. The neural network was trained and tested on SMOS L3 weekly data taken during August of 2010, 2011 and 2012 and on corresponding L2 MODIS data. The SSS/Rrs relationship is valid for range of SSS from 29 to 35 psu, for period of the highest rates of Amazon discharge into the ocean (July - October) with the average retrieval error of c.a. 1.5 psu. Errors of SSS retrieval from optical data were analyzed with regard to seasonal cycle of river discharge, MODIS and SMOS measurement accuracy, limitations of the neural network approach. A linear correction approach was developed for extrapolation of the found SSS/Rrs relationship on other months when concentration of DOC end-member in the riverine waters is different. The neural network and linear correction was applied to MODIS L2 data from the period 2002 - 2012 and monthly fields of SSS for August, September and October were reconstructed at 10 km resolution. Time series of SSS, plume area and shape were analyzed with regard to the Amazon discharge rates and behavior and fate of passing hurricanes. 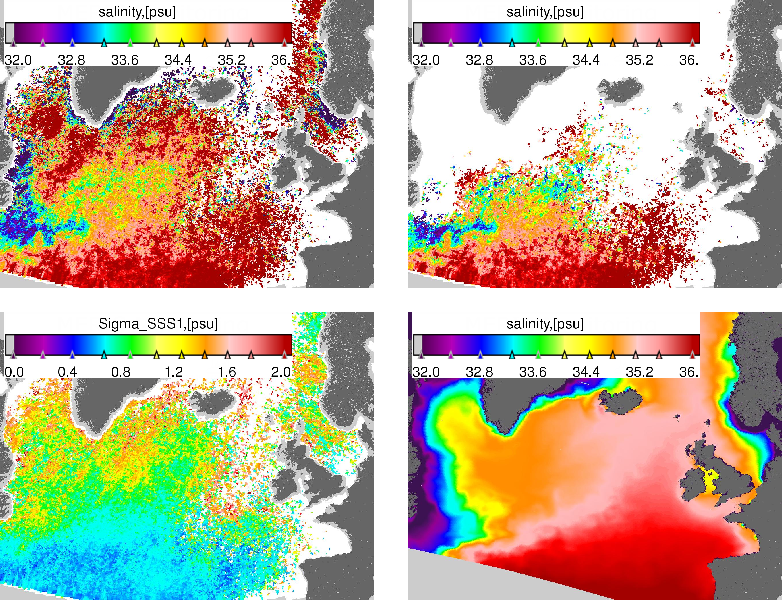 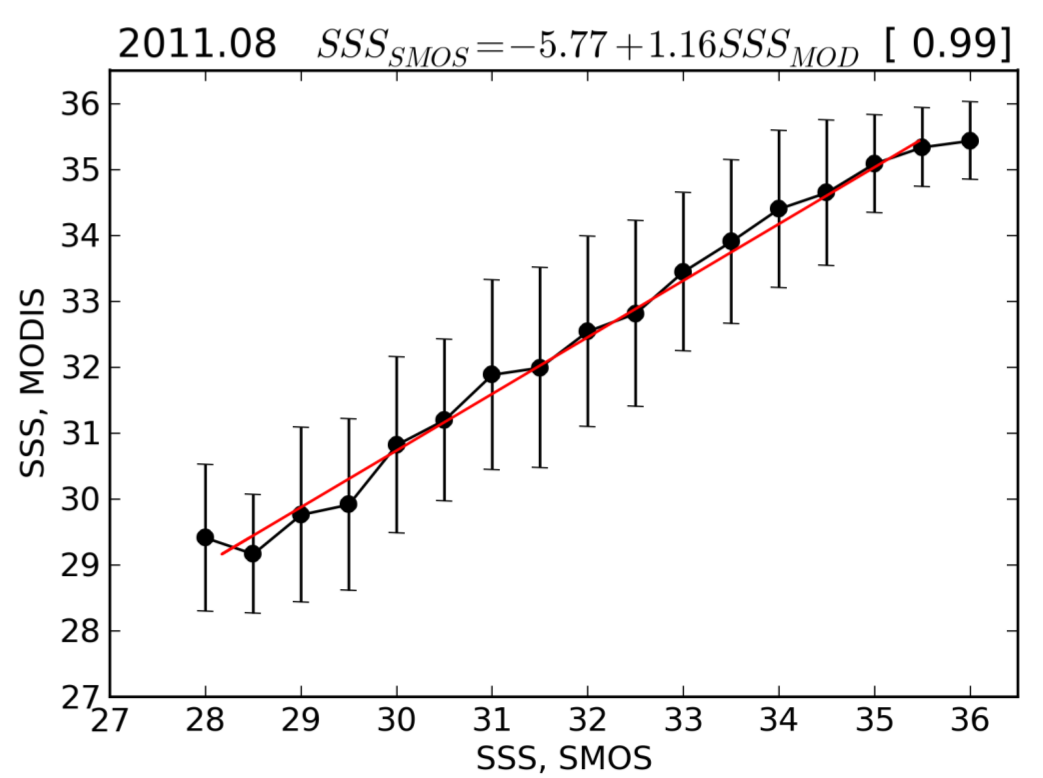