Deformed ice building up on structures or on the seabed (in the form of stamukhas) is a common problem in many areas of the Arctic and sub-Arctic. This ice can create pressure on artificial structures. It can also result in scouring of the sea bed which can rupture pipelines. It may also threaten shipping if the ice is grounded and therefore offering significantly enhanced resistance to vessels.

The German TanDEM-X mission is the first space-borne bi-static X-band satellite constellation intended to generate a worldwide, consistent, timely, and high-precision Digital Elevation Modell (DEM). In the present study we exploit TanDEM-X mission bi-static data to derive DEM over sea-ice. This is not a typical application of SAR Interferometry, which is generally applied over solid earth. The interferometric evaluation over sea-ice is a challenging approach facing several new insights, e.g. the bi-static interaction of emitted X-band signal and ice/snow coverage. Furthermore the interferometric process of bi-static data needs a technical software adaption.

In theory, interferometry of single pass bi-static SAR data can be applied to generate precise digital elevation models (DEMs) of sea ice topography in areas where the ice is thickened, for example in the vicinity of fixed structures, like oil rigs, or near the coastline. Using data from the combined TanDEM-X radar mission (Figure 1), DEMs were generated using single pass bi-static interferometry in the N.E. Caspian Sea during the mid-winter of January to February 2012. Beside the DEM generation the current status of sea ice and its variation in time can be described on the basis of amplitude and coherence information. The interferometric analysis is complemented by a polarimetric analysis, based on dual polarisation data.

It is shown, that this technique can be used to detect and to profile stamukhi, stacked ice and ridges around fixed structures through the freezing season. Additionally, the ice drift can be monitored by a time series, weather and daylight independent. The bi-static coherence in a time series can provide information on the change of the ice condition. 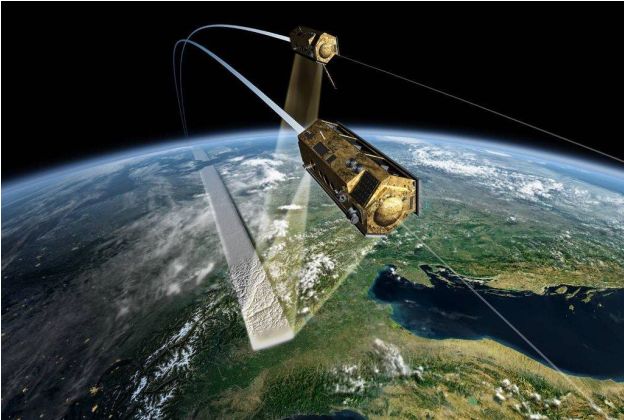