Although CryoSat-2 was developed as a cryospheric altimeter and not as an ocean altimeter, oceanographic applications of the CryoSat-2 data have started to emerge. NOAA, working in close partnership with the ESA Cryosat Mission Team, has been producing an ocean product, in netCDF form, similar to the Interim Geophysical Data Record (IGDR) of Jason-1 and -2. Based on the low resolution mode (LRM) data, this product was designed to facilitate monitoring open-ocean phenomena, such as mesoscale currents, wind speed and wave height. Because CryoSat-2 is running in SAR or InSAR mode in many of the coastal research areas, such as the North Sea and the Mediterranean Sea, we have more recently focussed on including the SAR mode data in a consistent way.

We have shown that the CryoSat data is intrinsically of high quality, and for nearly two years now have been providing the "IGDR" data through FTP as well as through our RADS service. The processing steps include:

In order to extend the data products to the coastal regime and fill other gaps in the LRM coverage, we have developed a process in which the SAR data are first combined into "Pseudo-LRM" or "reduced SAR" wave forms, which are similar to the conventional pulse-limited wave forms. The reduced SAR wave forms are retracked and combined with the LRM data to form a harmonised product. Although this sounds relatively straightforward, many steps were needed to get this done:

The Pseudo-LRM data have been merged with LRM data and have been available via RADS since October 2012.

Since then, NOAA has developed some other techniques to retrack the SAR data, taking advantage of the higher spatial resolution it can provide. We will show the relative performance tradeoffs that need to be made by running a sliding scale between full SAR processing and the full pseudo-LRM processing. This effort particularly aims to prepare for the Sentinel-3 and Jason-CS missions which are likely to run in SAR mode over all ocean surfaces.

In this presentation we will demonstrate how the quality of the CryoSat-2 data processed by NOAA compares to other altimeters (Envisat, Jason-1 and Jason-2) by means of data distribution maps, histograms and crossover comparisons. We will also present comparisons with the standard Level 2 products and assess their quality. Even in terms of sea level change monitoring, CryoSat-2 is following the same high rate of change of about 7 mm/yr as observed by Envisat, Jason-1 and Jason-2 over the years 2011-2012. 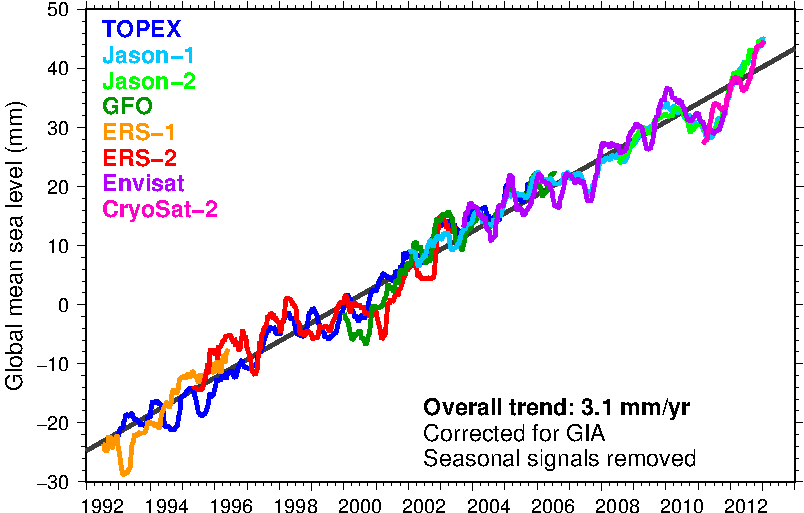