Over the last 20 years multi-temporal SAR data sets were acquired in large numbers and over many sites. Related processing techniques were developed and the multi-temporal SAR data showed a significant potential for a wide variety of applications. This will even more so be the case with the upcoming Sentinel-1 SARs of ESA which are designed to achieve global coverage with short repeat intervals. It is important to clearly state here that true acquired coverage and not ''potential coverage'' is meant. Using a constellation of two satellites and operating these in a special ScanSAR mode permits to achieve complete coverage over land every 6 days or even more frequently if ascending and descending orbit coverage is acquired. As a result, Sentinel-1 will consistently provide excellent multi-temporal data.

For applications based on SAR backscatter in general, and particularly for a mission providing data at about 20m resolution as Sentinel-1, speckle reduction is very essential. For multi-temporal data multi-channel filtering similar to Quegan et al. 2001, shows a very good potential. The main aim of this filtering is to create a set of M speckle-reduced images by linearly combining M registered images acquired on the same area. In the filter function (see Figure 1) the input intensity data as well as an estimate of the local mean backscattering coefficient are used. In the original method by Quegan et al. 2001, the local mean backscattering coefficient is estimated from the data by averaging intensity values in a local window around each pixel in each image. One possibility to improve this estimation of the local mean backscattering coefficient is to use an adaptive estimator to optimize the trade-off between good reliability of the local estimate and little spatial degradation (Wegmüller et al., 2002). More recently Caves et al., 2011, proposed to design the spatial filter used in the estimation of the spatial averages in the multi-temporal filtering considering not just the scene for which it is applied, but to do this based on the multi-image data stack. Using such a multi-temporal filter based on the structural filter as proposed in Lee et al., 2003 this permitted optimizing the filtering effect while maintaining a high spatial resolution.

Assessment of filtering performance and usefulness for applications

In the multi-image filtering, an assumption used is that the spatial patterns remain unchanged over time. This is often almost perfectly the case for agricultural fields, built up structures as houses, roads, power lines, dams and alike also meet this criteria. As a consequence, the filter performs well over these targets with a significant increase of the Equivalent Number of Looks (ENL) over homogeneous areas such as fields while maintaining individual scatterers and field boundaries sharp. In areas with varying geometries (e.g. in tidal zones, or for vehicles) where the assumption of temporally stable geometries is not met for all boundaries and bright targets we can observe cases where the proposed filtering is not optimal but overall the results still look quite reasonable also in these cases.

Applying the structural filter in the estimation of the spatial averages used in the temporal filtering is particularly attractive when working at high spatial resolutions with a low number of looks per pixel as it permits getting high resolution (for a given sensor) results with reasonable look numbers. Figure 3 shows a small section of an unfiltered and temporally filtered scene of a TerraSAR-X stack demonstrating the visual improvement from the filtering. What is more relevant for applications is that the ENL is increased by more than a factor 10 which is very relevant when applying algorithms. Applications as soil moisture monitoring, crop parameter retrieval, classification and change detection can strongly benefit when working at pixel level. The main advantages over the standard multi-temporal filter by Quegan et al., 2001 are the much more local transition between different backscatter levels e.g. between adjacent fields and that strong individual scatterers remain better focused. On the other hand, the standard method results in slightly higher ENL values because a larger number of pixels is considered in the estimation of the spatial averages used in the multi-temporal filtering.

Applying azimuth spectrum band-pass filtering to ERS-1 data acquired in the ice-phase mode with 3-day repeat cycles we simulated data with similar characteristics as for the Sentinel-1 interferometric Wide Swath mode and applied the advanced multi-temporal filter. The results (see Figure 4) confirm that a significant improvement can be achieved. The ENL increased over fields from about 1.5 to about 10. 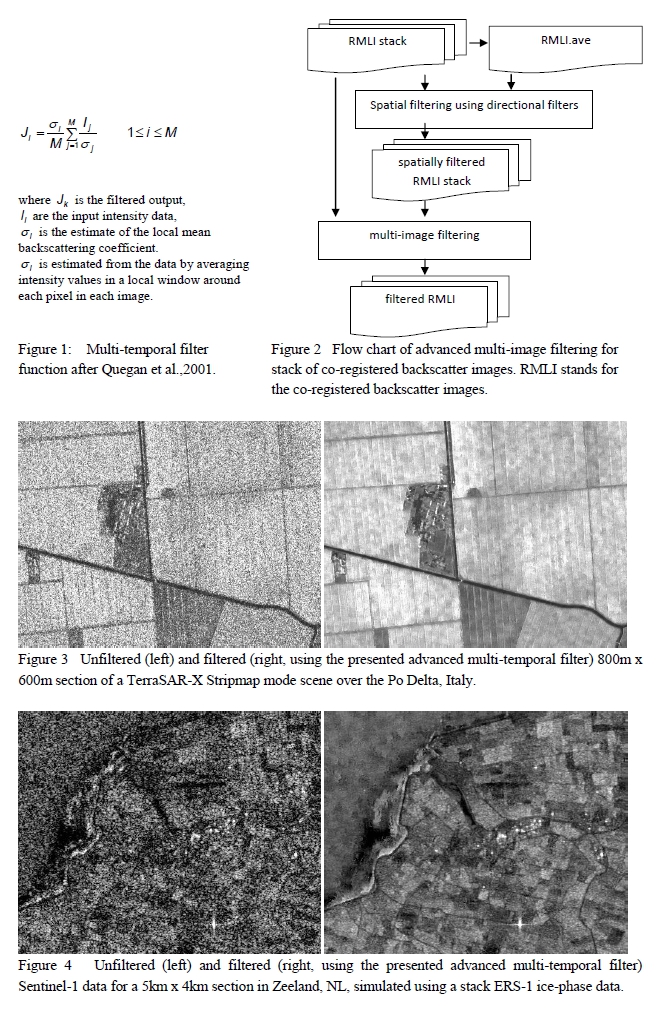