In recent years, accelerometer measurements from the CHAMP and GRACE satellites have revealed evidence for the penetration of non-migrating (longitude-dependent) solar tides into the 400-500 km region of the thermosphere. These tides are generated for the most part in the troposphere by solar radiation absorption and latent heating; they propagate vertically, grow exponentially with height, and undergo dissipation in the thermosphere. Accelerometer measurements from the GOCE satellite provide the opportunity to view the nature of these tides in middle thermosphere (ca. 250 km) densities and winds and with improved precision compared with, e.g., CHAMP. However, the Sun-synchronous orbit of GOCE presents a new challenge in terms of identifying and separating the different tidal components. In this paper we demonstrate how the GOCE data can be analyzed to extract waves of interest, validate the GOCE data against co-planar CHAMP measurements, and provide new science results from this methodology. As an example, the figure below illustrates 5-day average ascending minus descending density differences versus longitude from GOCE (top) and CHAMP (bottom) accelerometer measurements when these two satellites were near co-planar in May 2010. The ascending minus descending differences tend to isolate diurnal tides, and the wave-2 longitude structure suggests predominance of a eastward-propagating diurnal solar tide with zonal wavenumber s = -1 (DE1). We will also describe how similar validation and science can be accomplished within the context of the Swarm Mission, and preliminary results will be shown if Swarm launch occurs by mid-summer 2013. 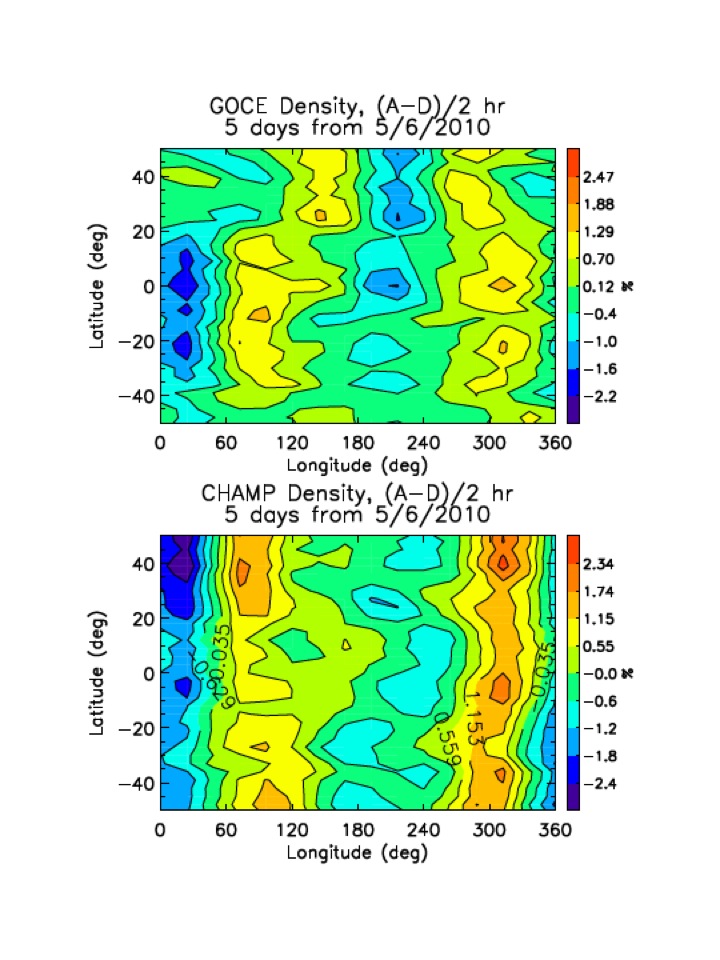