Indonesia has extensive natural forest cover, of which 50% is classified as primary forest according to FAO (FAO, 2010), but it ranks second among the countries of the world as regards rates of forest loss and greenhouse gas emissions from forest degradation and loss. Recent work on detecting tropical deforestation in Indonesia at the University of Sheffield, in collaboration with the World Wildlife Fund (WWF), has focused on the use of ALOS PALSAR data. The detection is based on the temporal standard deviation (SD) of time series of ScanSAR and the intensity ratio of FBD images (Fine Beam Dual HH & HV polarizations) from two separate times. However, the detection rates (using automatic methods) are only around 80% even accepting a false detection rate of 20% (Whittle et al., 2012), although better performance would almost certainly be possible using human interpretation. One of the major problems for L-band data is large changes in backscatter associated with flooding under the forest canopy, which is common in the swamp forests of Indonesia. This leads to much false detection. It is likely that this effect will not occur in C-band data, so that Envisat ASAR, used in conjunction with PALSAR, may provide a powerful means to correct these errors and also to improve the detection rate.

The study area lies in Riau Province, Sumatra, Indonesia. This area is well overlapped by the ALOS ScanSAR, FBD data and ASAR WSM data, as well as the Landsat data which are used for the WWF land cover maps from 2007 (Uryu et al., 2008) and 2008 (Uryu et al., 2010). This study also uses 12 ASAR WSM VV images, acquired between April 27 2007 and July 25 2008. This is a complete image series separated by 35 days except for the scenes in December 2007 and May 2008 which are missing. Fortunately this does not degrade the detection performance. Figure 1 shows the forest change during the year 2007 and 2008 based on the WWF databases. Red is deforested and green indicates undisturbed forest. The dark area is non-forest and will not be considered in the study. This is used as a reference to assess the detection performance on the SAR data.

The ASAR WSM data are imported into NEST ESA SAR Toolbox (Engdahl et al., 2012) and then Geocoded Terrain Corrected (GTC) and absolute calibration is conducted based on the product header information. The GTC reduces the impacts of terrain in hilly areas and is expected to improve the detection performance based on WSM temporal SD. Before the whole image sequence can be compared at the pixel level, the data was registered using GAMMA software (GAMMA, 2007), multi-channel filtered (Quegan and Yu, 2001) to reduce speckle, and spatial filtered for further speckle reduction. Because of the need to combine the ASAR data with PALSAR data (which needs the same operations), care was taken to ensure consistent geometry between the two.

We first used the same parameters as in Whittle et al. (2012), i.e. spatial filtering and window length of 5 for temporal standard deviation (SD). However, the detection is poor and noisy, leading us to examine the filtering strategy to obtain an optimum window size as regards speckle reduction and detection performance. The detection rates based on ASAR WSM temporal SD against window size are shown in Figure 2. It can be seen that detection rates initially increase as window size increases, but then saturate at a window size of around 21x21. The whole WSM scene is therefore filtered using this size window, then masked by the relevant ALOS FBD scene and resampled to the same pixel size of 12.5m as show in Figure 3 left. At the right of Figure 3 is the Principal Components Analysis (PCA) combination of ESA WSM and ALOS PALSAR FBD and ScanSAR measurements. The results are much less noisy. The PCA combination of all the three measures can obtain an enhancement of 5.5% compared with the PCA combination of ALOS measures only (ALOS ScanSAR SD and FBD ratio results). By comparison, the detection rates from combining just ALOS FBD and ESA WSM and just ALOS ScanSAR and ESA WSM are 83.9% and 83.0% respectively at false alarm rates of 20% (74.1% and 65.8% respectively at false alarm rates of 10%). The best detection is achieved by the combination of ESA WSM with ALOS FBD and ScanSAR measurements which can achieve a detection rate as high as 88.7% at a false alarm rate of 20%.

Figure 2 Detection rates based on ESA WSM temporal SD against window sizes at false alarm rates of 10% and 20%. 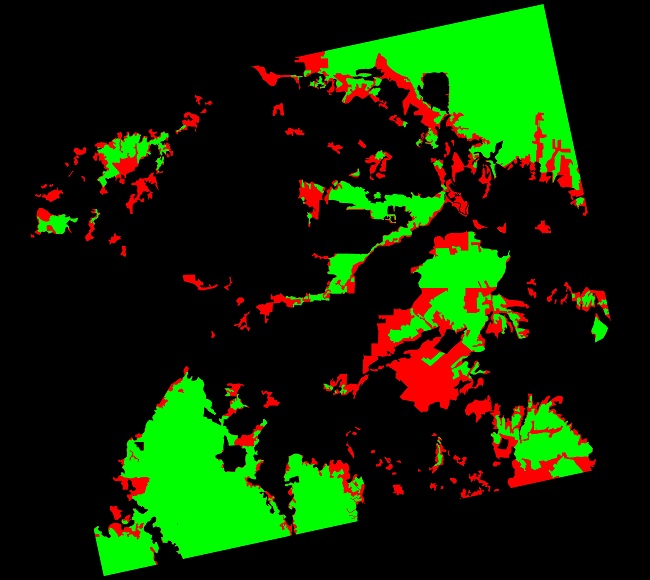 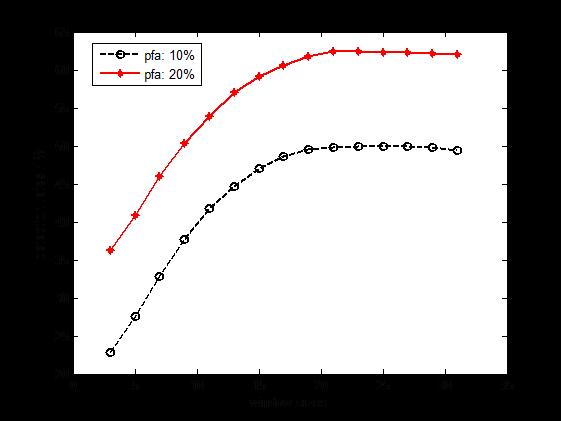