Remote sensing of sea ice started in the late sixties of the last century. Later it became the main source of information about sea ice variability and concentration in the Arctic, Antarctic and in polar seas. Ait temperature and winds in the Okhotsk Sea and in the Northern Japan Sea during cold season are similar to weather conditions in the Polar Seas and the sea ice covers the significant areas. Data on the ice conditions, new ice formation areas, ice types and thickness, marginal ice zone structure, the location and size of polynyas, etc. as well as on characteristics of different ice types, their synoptic, seasonal and interannual variability manifesting itself in variability of microwave, infrared and optical characteristics have a critical importance for scientific and applied works.

The aim of this study is to estimate the capabilities of the joint analysis of active and passive microwave sensing in combination with infrared and optical images and coastal observations. Our data base consists of C-band Envisat ASAR and L-band ALOS PALSAR synthetic aperture radar (SAR) images, brightness temperatures measured by the Aqua Advanced Microwave Scanning Radiometer AMSR-E and recently launched GCOM-W1 AMSR2, visible and infrared images taken by MODIS spectroradiometer, ASCAT MetOp-A and –B derived wind fields. The Okhotsk Sea and Northern Japan Sea have practically no instrumental observations for winter periods. Thus only reports of coastal meteorological stations were collected. To estimate correlations of microwave and optical contrasts the main attention was given to consideration of ice cover during day time under almost cloudless conditions. Different physical parameters are responsible for formation of signal variations in these spectral bands. The brightness variations of SAR images are proportional to the normalized radar cross section (NRCS) defined mainly by the underlying surface roughness and depend on polarization and wavelength of sensing signals and incidence angle. The variety of ice types, conditions of ice formation and evolution, snow cover thickness and properties, surface wind speed and other factors tends to ambiguous interpretation of brightness variations of SAR images, discriminating ice types and open water within ice cover and in the marginal ice zone. Brightness variability on SAR imagery of the sea surface is described by geophysical model function (GMF) for particular frequency and polarization, incident angle, and wind speed and azimuth angle. Increase in the sea surface roughness is accompanied by the increase of the NRCS (brightness of radar image). Brighter areas indicate the strips of ridges and ridged ice. The areas of the decreased roughness appear on SAR images as dark spots, narrow and wide bands. These features can be caused by fracture zones at low wind speed and also by grease ice that damps small-scale wind waves. Grease ice is reliably distinguished near the ice edge and in the open sea against the rough water surface background where it marks the areas of new ice formation.

Three areas were selected for detailed study with Envisat ASAR and ALOS PALSAR: the Sakhalin Bay (number 1 in Fig. 1 and 2), Eastern Sakhalin shelf where several oil platforms are located (number 2) in the Okhotsk Sea and Tatar Strait in the Northern Japan Sea (number 3). The first area was studied to trace new ice formation and the decrease of ice thermal response as its thickness increases. The second one is very dynamic area where influence of tidal current and the East Sakhalin Current as well as strong winds on sea ice structure (especially on the marginal ice zone), drift, etc. are observed. The third area as opposite to the second one is more quit: surface currents are weak and the main factor (apart of air temperature) influencing on sea ice dynamics is wind. Coastal stations provided this important meteorological data. In cold season 2012-2013 sea ice in all three areas was traced using a new all-weather source of data: GCOM-W1 AMSR2. Spatial resolution of AMSR2 brightness temperatures is very high due to the largest rotating antenna in the world: 7 x 12 km at 36.5 GHz and 3 x 5 km at 89.0 GHz. The high potential of joint analysis of these data with Terra MODIS visible and infrared images shows Figure 2. These data were systematically used to reveal additional characteristics of the selected sea ice areas. Analysis of SAR images which will be obtained from Sentinal-1 and ALOS-2 SARs planned to launch in 2013 will be based on experience of this study. 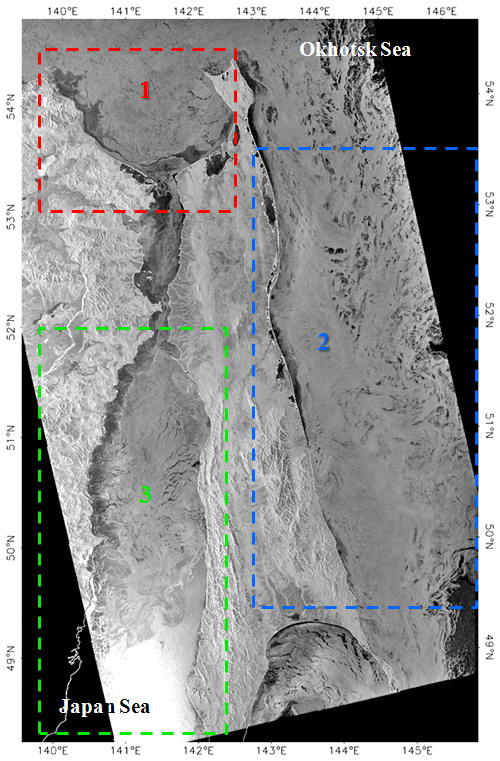 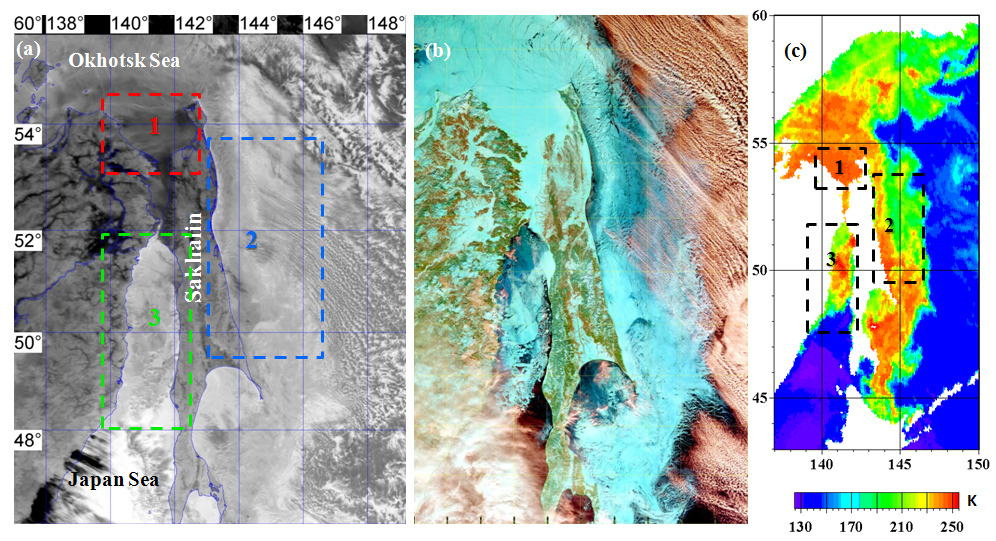