Precise along-track coregistration is particularly relevant for the Interferometric Wide Swath Mode of the upcoming Sentinel-1 satellite. Azimuth mis-alignments introduce spurious interferometric phases when operating in the TOPS mode, because of the large Dopplers found at the beginning and end of each burst. So far the most robust solution proposed is to coregister each image with respect to a master using the technique called enhanced spectral diversity (ESD,[1]), that exploits the overlaps between successive bursts and has the advantage of not needing the removal of the interferometric phase, different from pure cross-correlation.

In this paper we present some results from a study for ESA. First we show the conclusions of a Cramér-Rao bound analysis: depending of the coherence model, there might be an advantage in estimating the shifts jointly for the entire stack, compared to estimating them only with respect to a fixed master, as in ESD. This can be clearly seen in Fig. 1, which compares a direct estimation with a joint estimation (actually, its Cramér-Rao Lower Bound, or CRLB). According to a simple but reasonable coherence scenario, the later the slave, the worse the co-registration performance becomes. The joint estimation should be able to limit the performance degradation and follow the CRLB prediction. Not all coherence scenarios will need a joint estimation. For instance, theoretical analyses show that if we had enough Persistent Scatterers (stable point scatterers) there would be no need for a joint estimation.

In this contribution we also propose a new joint estimator for the azimuth offsets, which is an evolution of the one presented first in [2], adapted to be computationally efficient over large areas, and incorporating the lesson of ESD. It can actually be described as a hybrid between ESD [1] and the one in [2]. First we estimate the shifts (or offsets) between all possible image pairs, using ESD. Then we find a set of shifts, one per image, that satisfy as well as possible all the pairs, according to some measured or assumed temporal coherence structure. The second step uses the phase linking algorithm in [3].

The joint estimation technique is applied to two repeat-pass TOPS datasets acquired by the TerraSAR-X mission over the Afar region in east Africa and over Mexico City. For example Fig. 2 reports some preliminary results on swath 3 of the Afar region dataset. The joint estimator is compared to ESD and is often found to perform several dB better, which means that its estimation variance is several dB smaller than the one of ESD. The statistic is built assuming that the error is constant along azimuth and each burst overlap provides, thus, an independent sample.

The results will be analyzed with respect to the coherence spatio-temporal properties, which are not uniform across the scene.

A final discussion will stress the limitation of the proposed scheme (mostly computational) and some proposed solutions, like coregistering separately for coherent clusters or within a limited time span. The choice of the best coregistration method, according to the theory, depends on the supposed or observed temporal coherence pattern.

[3] A. Monti Guarnieri and S. Tebaldini, On the exploitation of target statistics for SAR interferometry applications, IEEE Transactions on Geoscience and Remote Sensing, vol. 46, no. 11, pp. 3436-3443, Nov. 2008 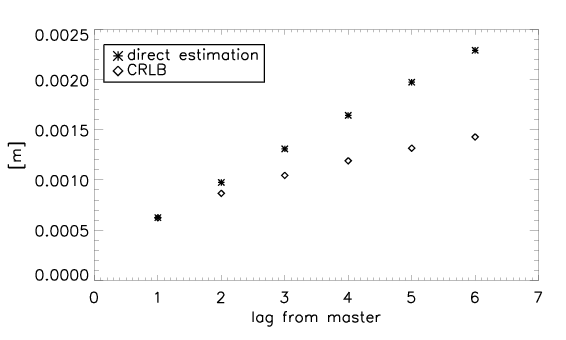 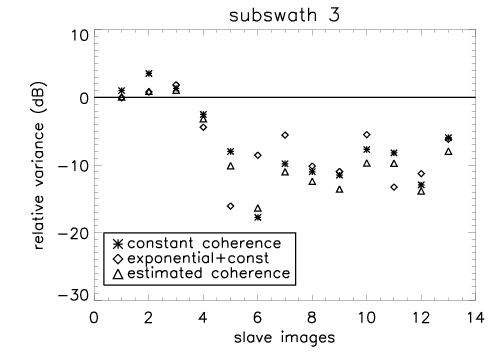