We performed an integrated analysis of microgravity and ground deformation data recorded by ERS/ENVISAT and COSMO-SkyMed satellites at Etna along an East-West trending profile of 19 stations on the southern flank over a 16 year time span. This long-term dataset constitutes a unique opportunity to examine the behavior of Etna in a period in which the volcano exhibited different styles of activity characterized by recharging phases, flank eruptions and fountaining episodes. The gravity and deformation data allow to investigate the response of the volcano in a wider perspective providing insights into the definition of its dynamic behavior and posing the basis to track the unrest evolution and to forecast the style of the eruption.

A 16-years long microgravity and deformation data-set (June 1995 - December 2011) along a 24-kilometer East-West trending profile of 19 stations on the southern flank of the Etna volcano are analyzed. To measure the deformation along the southern flank of the volcano, we analyzed a data set composed of 132 descending and 155 ascending orbit SAR images, acquired by ERS/ENVISAT satellites and 119 descending and 121 ascending images acquired by Cosmo-Sky Med satellites. The satellite data were processed using the Small Baseline Subset (SBAS)-InSAR algorithm (Berardino et al., 2002), which allows to detect surface displacements and analyze their temporal evolution by generating deformation maps and time series projected along the radar Line of Sight (LOS). The ascending and descending orbit data were combined to resolve vertical and horizontal displacements. From the deformation time series we selected the coherent SAR pixel closer to the gravity benchmarks (the distance between the SAR pixels and the respective gravity benchmark ranges from 21 to 700 m for the ENVISAT series and from 8 to 300 m for the CSK series). Figure 1a-b shows the horizontal and vertical deformation measured in the East-West profile stations (y axis) between June 1995 and December 2011 (x axis). The vertical deformation range between -20 cm to 6 cm associated with a horizontal deformation from -13 cm to 38 cm over the all period.
During the same period microgravity measurements were conducted along the East-West profile by the "step method", thus each pair of adjacent stations are connected at least three times in order to monitor continuously the instrumental performance. Since its installation (summer of 1994), 121 surveys were carried out using the Scintrex CG-3M gravimeter (serial # 9310234) until December 2011. Uncertainties in gravity measurements collected with the Scintrex CG-3M gravimeter, ranging between 7 and 11 µGal at the 95 percent confidence interval, are normally achieved (Greco et al., 2010). Before we could interpret the gravity changes over time, it is necessary to reduce the gravity data from the free-air effect, seasonal variations and several high-frequency disturbances (e.g., Currenti et al., 2007). We firstly corrected the observed gravity variations for the free-air effect using the InSAR derived vertical deformation (Fig. 1b) and the theoretical vertical gravity gradient (-308.6 µGal/m). Height changes, evaluated by DInSAR time series during the entire period, show large variations able to produce significant gravity changes. The free-air effect was particularly important in proximity of the South Rift with a maximum value of about 60 µGal associated with the larger height changes over time (-20 cm). The free-air corrected gravity changes were then reduced following the approach by Greco et al. (2010). We applied a 2-D wavelet multi-resolution analysis on the spatiotemporal gravity map to highlight the useful signals (i.e. the volcano-related one), reducing the high frequency variations (noise) and the seasonal fluctuations, mainly due to water-table fluctuations. Figure 1c shows the residual gravity variations in the East-West profile stations (y axis) between June 1995 and December 2011 (x axis).

The joint analysis of the deformation maps and the residual gravity variations highlights common periods, in which the analyzed signals underwent contemporaneous changes occurring mainly in the central and eastern stations. On the other hand, no significant changes in the behavior of deformation and gravity signals are observed in the westernmost stations. From 1995 to 2001, an overall uplift of the volcano, a slight spreading of the volcano flank, and cyclic gravity variations are observed. This style abruptly interrupted in correspondence of the 2001 eruption when a new more complex behavior arose with predominant negative gravity changes, positive and negative discontinuous height changes accompanied by outstanding horizontal deformation. This trend stopped in 2009 when new positive gravity changes were observed in correspondence with a rest in vertical and horizontal deformation. Indeed, the integrated analysis of the spatio-temporal variations of the gravity and the ground deformation data highlights three different volcanic processes controlling the dynamical behavior of Etna volcano in this sector: (i) deep magma rising and accumulation in intermediate zones mainly detectable in the western flank, (ii) magmatic intrusions at shallow depth in the South Rift area and (iii) the seaward sliding of the eastern flank.

ACKNOWLEDGMENTS
The COSMO-SkyMed data used in this study have been processed at IREA-CNR within the SAR4Volcanoes project under Italian Space Agency agreement n.I/034/11/0. 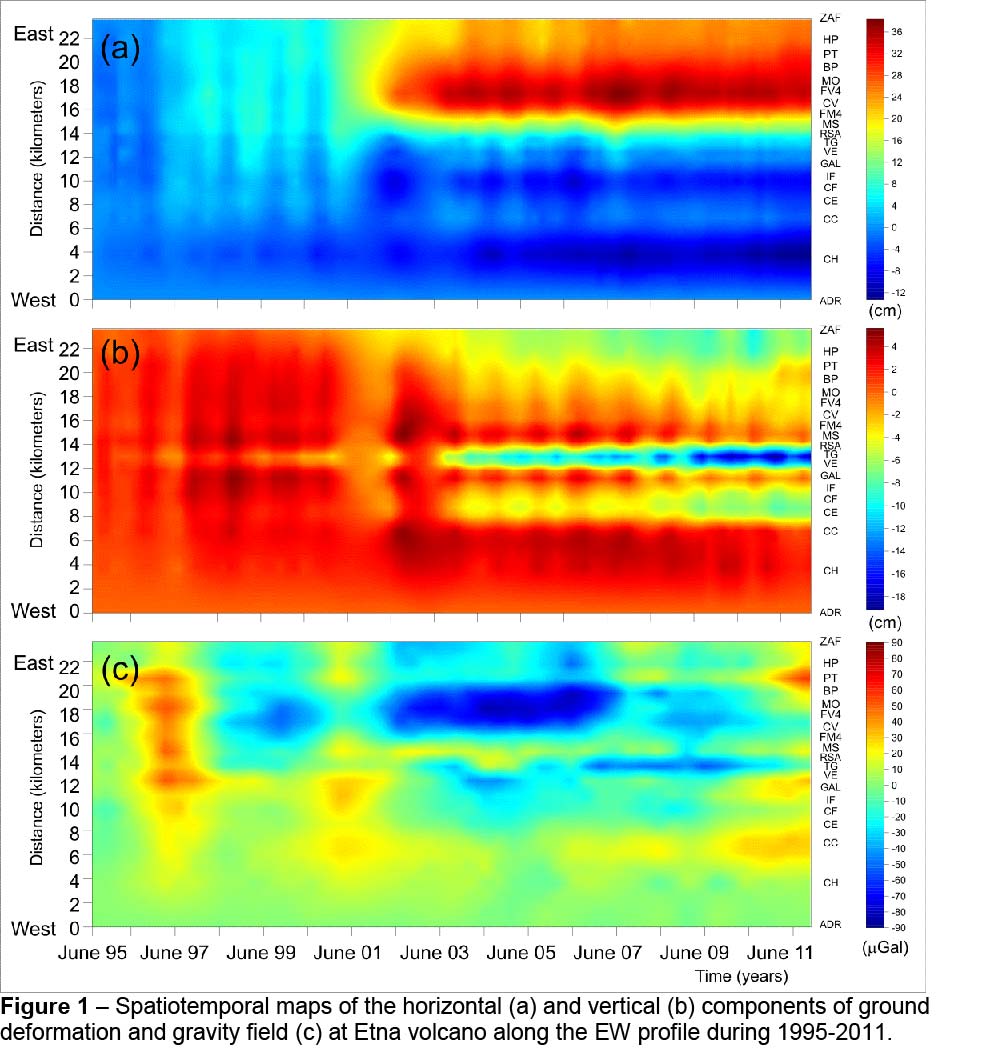