Knowledge of the variability in river discharge is of fundamental importance to planners managing flood hazards and water resources, and to scientists concerned with climate change. However, in many rivers ground-based measurements are currently not available due to the region being sparsely populated, difficult to access or politically unstable. Satellite data has the potential to overcome these problems and provide reliable discharges on all major rivers.

1) Automatic removal of erroneous values of altimetry stage data. The ERS-2 and ENVISAT satellite altimetry provides water levels at a location every 35 days. However there are some errors in the altimetry stage data, with large errors resulting from errors in locating the river, particularly at some location with island/sand banks. By utilizing the many other satellite crossing points along the same river these errors were automatically removed.
2) Production of a time series of daily stage data from the 35 day satellite altimetry data at a particular location. Again use is made of the many other satellite crossing points at other days in the 35 day cycle.
3) Use of satellite altimetry and imagery together to define the channel cross-sections. These were defined by considering a long (50km) reach of river and a range of high and low flows.
4) The application of the daily stage data and the cross-sections in the Bjerklie hydraulic equation to produce a daily discharge time series. This equation was developed using a global database of channel hydraulic information and discharge measurements and is based on the Manning's equation.

The main difficulty with the technique is the unknown bathymetric depth. i.e. the water level below the minimum measured altimetric stage level. The pragmatic solution here was to use a single Q90 (the discharge exceeded 90% of the time) for another location on the same river (the only in-situ value used in this work) to help estimate this depth. This Q90 value was considerably upstream/downstream of the estimated discharge location and it is important to note that all major river systems have some historic discharge data.

The methodology has been applied at four locations on three major rivers: the Mekong, Ob and Amur. The daily discharge estimates from the satellite data was then validated against daily in situ discharge measurements. The results show Nash-Sutcliffe efficiencies of greater than 0.86 at all four locations. As there was no calibration in estimating the discharges the technique has the potential to provide discharges in rivers where there are currently no ground-based measurements. The procedure can be extended to other large rivers, as it is relatively simple to apply. 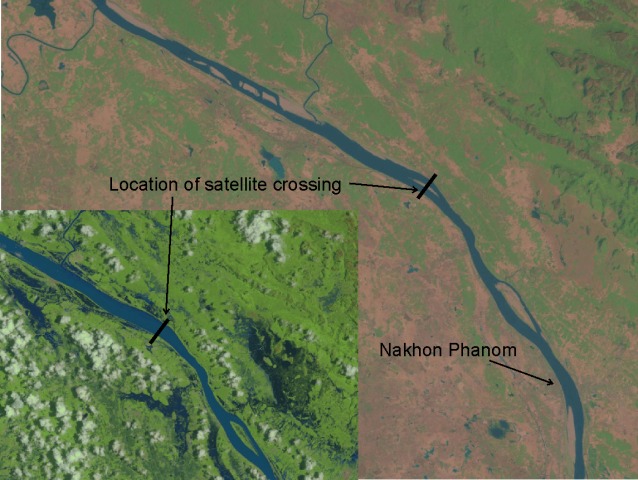