ALOS (Advanced Land Observing System; www.eorc.jaxa.jp/ALOS/en/index.htm) was launched on 24 January 2006 and on 22 April 2011 a power generation anomaly caused an irreversible loss of communication. It had a target lifetime of five years. ALOS is a Japanese satellite mission with two optical remote sensing instruments: the Panchromatic Remote-sensing Instrument for Stereo Mapping (PRISM) for digital elevation mapping and the Advanced Visible and Near Infrared Radiometer type 2 (AVNIR-2) for disaster monitoring and precise land coverage observation. ALOS is part of the ESA third party mission program and in that context ESA has set up a ground segment using the JAXA operational processor. EOC is contracted by ESA to build an independent operational processor. Table 1 gives an overview of ALOS satellite, instrument, and processors. From January 2008 to April 2009 EOC developed the prototype processors for ALOS optical data and from April 2012 to February 2013 the operational processors. Since February 2013, the processors are in Phase E. For the prototype processor JAXA Level 0 data (raw data after restoration) served as input and products up to Level 1C (ortho-rectified including systematic and radiometric corrections) are generated for PRISM data and additionally to Level 2A (atmospheric corrections) for AVNIR-2 data. From these activities it was learnt, that apart from the fault-prone handing of a multitude of different inputs for JAXA Level 0 data, the systematic and radiometric corrections of the JAXA processors could not be improved by the DLR prototype processors. Therefore, for the operational processor JAXA Level 1b1 data (systematic and radiometric correction) that are also delivered to end users, serve as input and products up to Level 1C are generated. Furthermore, it was learnt, that apart from the absolute geo-location accuracy, the relative geo-location accuracy, which was independently validated to be within 10 m (linear root-mean-square-error) here, with respect to a standard reference image database is of major importance. Therefore, the application of a robust image matching technique is required for the operational processor. The Level 1B and Level 1C output formats are DIMAP for metadata including quality information and GeoTIFF for image data and the interfacing of the processor is compliant to that of the ESA multi-mission facilities.

EnMAP (Environmental Mapping and Analysis Program; www.enmap.org) is planned to be launched in 2017. It has a target lifetime of five years. EnMAP is a German satellite mission with a Hyperspectral Imager (HSI) for measuring, deriving, and analyzing diagnostic parameters, which describe vital processes on the Earth's surface encompassing agriculture, forestry, soil and geological environments, as well as coastal zones and inland waters. The imaging spectrometer consists of two 2-dimensional detector arrays, one for Visible and Near InfraRed (VNIR) and one for ShortWave InfraRed (SWIR). Jointly with the German Space Operations Center the EOC is responsible for the establishment and operation of the EnMAP ground segment. EOC is contracted by DLR to build the operational processor for DLR. Table 1 gives an overview of EnMAP satellite, instrument, and processors. Based on studies, since October 2008 EOC develops the operational processors for EnMAP data. Since August 2010, the processors are in Phase D. Due to the fact that acquisitions cover up to 1020 km x 30 km, the Level 0 processor divides them into 30 km x 30 km tiles in order to simplify the data handling also on end users' site. However, information relevant to or based on the complete acquisition, namely to achieve consistency between neighbouring tiles, are annotated to each Level 0 product, that are long-term archived. These are infor-mation on dark current measurements, which are performed before and after each acquisition, to ensure the high radiometric accuracy, geometric sensor model improvements based on image matching techniques to robustly improve the pointing knowledge from 100 m (absolute) to 30 m (relative), as well as water vapour and aerosol optical thickness maps for an accurate atmospheric correction. The Level 1A/B processor inputs are Level 0 product together with corresponding valid calibration tables as well as orbit and attitude products, whereas for the Level 1C and Level 2A processor the input is solely the output of the previous processor. During the detailed design activities for the fully automatic processors it was learnt, that due to the short-term - in combination with the long-term - behaviour of the satellite an increased effort in geometric processing is neces-sary to achieve a co-registration accuracy of 0.2 pixels between the VNIR and SWIR bands. The design of the HSI leads to a time separation of approximately 86 ms between the VNIR and SWIR bands and means that the SWIR scans the same area on ground about 20 lines delayed with respect to the VNIR.

To solve this issue in the geometric sensor model, experiences based on a similar separation of 5 lines between odd and even pixels for AVNIR-2 were proven to be useful. Figure 1 illustrates the co-registration issues for AVNIR-2 (real mission data) and EnMAP (simulated mission data).

The development of the processors benefited from each other, e.g. ALOS from EnMAP: high-quality documentation, consistent development methodology, and experienced efficient team – EnMAP from ALOS: experiences on other optical instruments and their algorithms, robustness of image matching in operations, and integration of processors to a processing chain.

We can conclude that even if there are differences in the functionalities of the ALOS and EnMAP processors, e.g. pan-chromatic and multispectral vs. hyperspectral, and in the development of the processors, e.g. real mission data vs. simulated mission data, there are various similarities that result in benefits for each other. 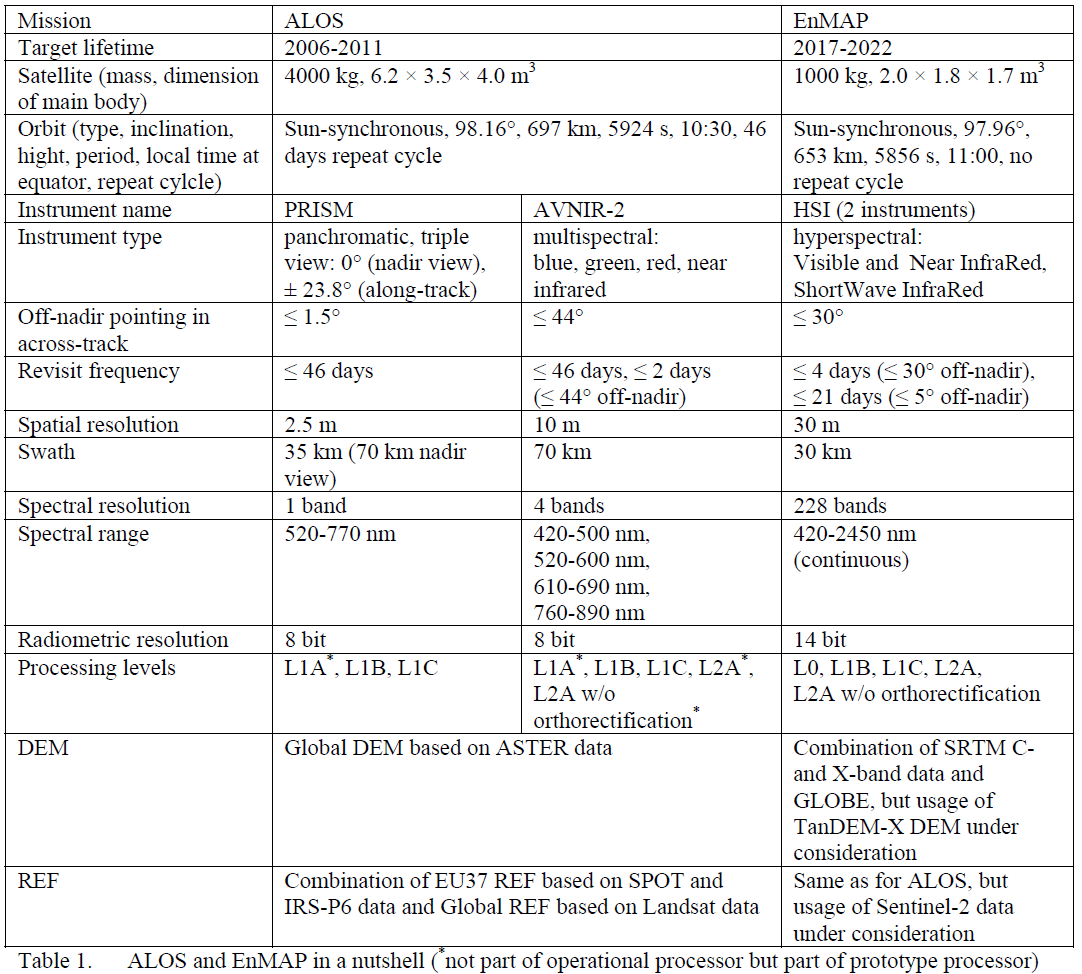