Fire is an important agent of disturbance of the land surface, affecting all continents and vegetation types. It is used as a tool for clearing land, and produces significant amounts of greenhouse gases. Due to the erratic nature of fires, their broad spatial distribution and importance in understanding processes in the land surface, EO is the only practical avenue for global monitoring of fire activity, usually carried out by estimating the area burned by fire.

Detecting burned area using data from moderate resolution sensors is fundamentally a change detection problem: as the fire affects the vegetation, it changes its optical properties. This change is detected and assessed to distinguish fire from other changes in the land surface (e.g. flooding, crop harvesting...). Two important challenges need to be overcome: the variation in reflectance ought to be related just the fire, and thus acquisition geometry-derived effects ought to be minimised, and a robust way of deciding whether a fire took place by considering the spectral pre- and post-fire refletance needs to be in place. In this contribution, we propose a fire detection approach based on (i) a more advanced signal tracking method using edge-preserving data assimilation techniques to fit linear kernel models to the observations and (ii) an interpretation of the change signal using a spectral linear model.

For signal tracking, we use linear kernel models to interpret the surface reflectance observations. The kernel weights are inferred using a 4DVAR DA system with a weak constraint. This weak constraint is a prior on temporal smoothness, which regularises what otherwise would be a ill-posed problem. A problem with smoothness constraints in regularisation is that they tend to smooth over abrupt changes, such as those encountered with fires. In this contribution, we implement regularisation in a way that is "edge-preserving", i.e., abrupt changes in the signal are not smoothed over, resulting in adequate regularisation in the pre- and post-fire periods, but no regularisation over the fire itself. The proposed method is efficiently implemented as an iterative linear problem, and ultimately produces estimates of pre- and post-fire reflectance for a given geometry.

To interpret the change in reflectance caused by the fire, we assume that fire causes defoliation (hence exposed soils) and a combination of char and ash. We use a simple linear mixture model where the post-fire signal is assumed to be a mixture of the pre-fire reflectance plus a typical burn signal, typical a mixture of dry soils, char and ash. This burned signal can be spectrally modelled by a constrained quadratic function. The proposed model is also linear.

Using MODIS data, we demonstrate the proposed algorithm over a number of different biomes. We also show that the retrieved parameters from the spectral linear mixture model that interprets the reflectance change due to the fire can potentially provide extra information on the impact of the fire on the scene. 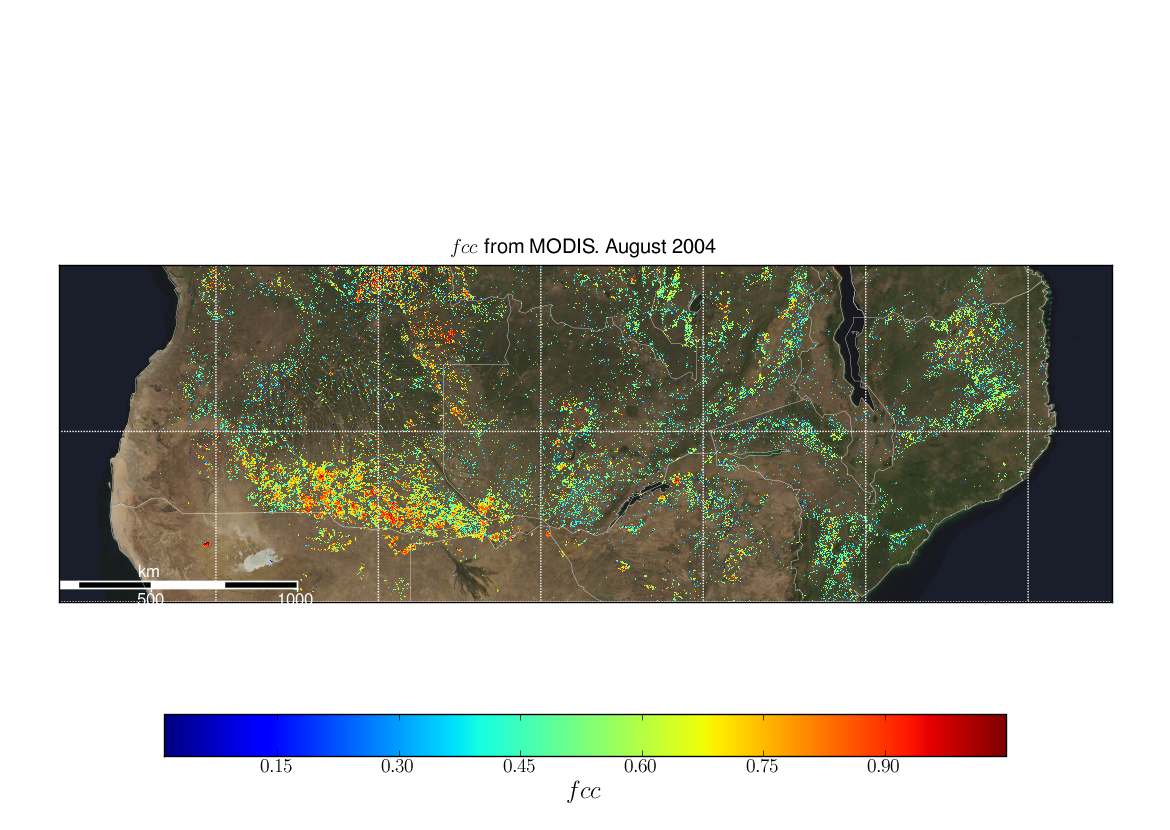