In response to concerns about tropical deforestation and global climate change, international discussions under the United Nations Framework Convention on Climate Change (UNFCCC) have led to the formation of a mechanism to Reduce Emissions from Deforestation and forest Degradation (REDD+) in developing countries. For REDD+ to be tenable as an incentives-based mechanism, a robust system for Measuring, Reporting and Verification (MRV) needs to be established in participant countries. A key component of a REDD+-MRV system is the measuring of Activity Data, which encompasses forest area change over time, including deforestation and forest degradation. Given the ability to map wide-scale forest area changes using satellite data, remote sensing science has played a leading role in the development of activity monitoring systems in REDD+ in several REDD+ candidate countries.

Despite the increasing availability of optical remote sensing data, methods that are commonly used to assess forest area change are often hindered by the limited amount of cloud-free imagery available at key time points in the monitoring period. While the Landsat missions have provided the most historical data to date to observe relevant changes, data gaps such as those resulting from the failure of the Scan Line Corrector (SLC) aboard Landsat-7 have necessitated the introduction of extra preprocessing and gap-filling steps, which can introduce errors into the processing chain, resulting in uncertainties propagated through the MRV process. Additionally, most existing change detection techniques rely on the selection of only a few scenes, neglecting most of the data available in the archive.

In this paper, we present a statistical data-driven method for detecting deforestation and forest degradation using dense time series data from the Landsat-5 TM and Landsat-7 ETM+ sensors. The pixel-based Break detection For Additive Seasonal Trends (BFAST) Monitor method decomposes time series in a defined historical time period into a harmonic (seasonal), trend and noise components, and uses these components to model the expected behaviour of the time series through a defined monitoring period. Pixels where observations deviate significantly from the modeled time series are labeled as breakpoints. The objectives of this study were to assess the applicability of the Bfast Monitor method in detecting deforestation and forest degradation in an afromontane forest ecosystem in Kafa zone, Southwestern Ethiopia, and to assess the implications of this forest monitoring approach on the development of a REDD+ MRV system in Ethiopia.

All available Landsat TM and ETM+ imagery with cloud cover less than 70% over Kafa, Ethiopia were downloaded from the USGS Glovis server and preprocessed within the LEDAPS preprocessing framework (Masek et al., 2006), while clouds and cloud shadows were masked using the Fmask algorithm (Zhu and Woodcock, 2012). Bfast Monitor was applied to a time series stack of NDVI images from 1983 until 2011 as described in Verbesselt et al. (2012). A stable history period was used to determine the expected trend of the pixel throughout a defined monitoring period. Pixels where the time series in the monitoring period deviated significantly from the stable model were flagged as breakpoints. Forest changes derived from Bfast Monitor breakpoints were mapped and validated against a time series stack of high-resolution SPOT5 imagery comprised of one scene per year from 2006 to 2011.

Bfast Monitor was shown to successfully detect deforestation as well as forest degradation insofar as canopy was detectable at Landsat-scale resolution. Deforested area derived from Bfast Monitor results were comparable to deforested area detected by classical bitemporal change detection methods. Since Bfast Monitor can pinpoint the timing of the detected breakpoint, this method carries the added advantage of being able to detect forest change at much higher temporal resolution than most other change detection approaches. In effect, the temporal resolution of the results was directly dependent on the temporal density of the data. Aggregating breakpoint times to an annual scale, the breakpoint timing could be used to report on annual deforestation and forest degradation trends (Figure 1).

The accuracy of the detected breakpoints were affected by several critical factors. First, the amount of data available in each pixel's time series affected the quality of the results, where high incidence of data gaps resulted in a incidence of false breakpoints. These commission errors are a result of a lack of data in the stable history period, where natural phenological changes in the monitoring period are mis-interpreted as breakpoints. Second, the magnitude of the change, calculated as the median difference between observed values and modeled values during the monitoring period, was related to the type of change. Magnitude values close to zero were often associated with commission errors, which could be eliminated by introducing a magnitude threshold. Finally, the quality of the forest mask used was found to have a strong effect on the presence of commission errors in the detected breakpoints. Misclassified pixels in the forest mask lead to the interpretation of cropland phenology in non-forest pixels as breakpoints (and therefore forest change).

This study demonstrates the utility of Bfast Monitor as a tool to detect deforestation and forest degradation at high temporal frequencies, with data availability representing a key constraint to the method. While the problem of insufficient data is a limitation of the method given current availability of Landsat data, the launch of the Landsat Data Continuity Mission (LDCM) in February 2013 as well as the anticipated launch of ESA's Sentinel-2 mission represents a new era of optical time series data availability, for which simple and statistically robust methods are needed for the implementation of REDD+ MRV systems in developing countries. To this end, Bfast Monitor has been shown in this study to be a useful tool in the detection of deforestation and forest degradation at frequent time intervals, and will play a key role in fully realize the value of these increasingly large time series datasets. 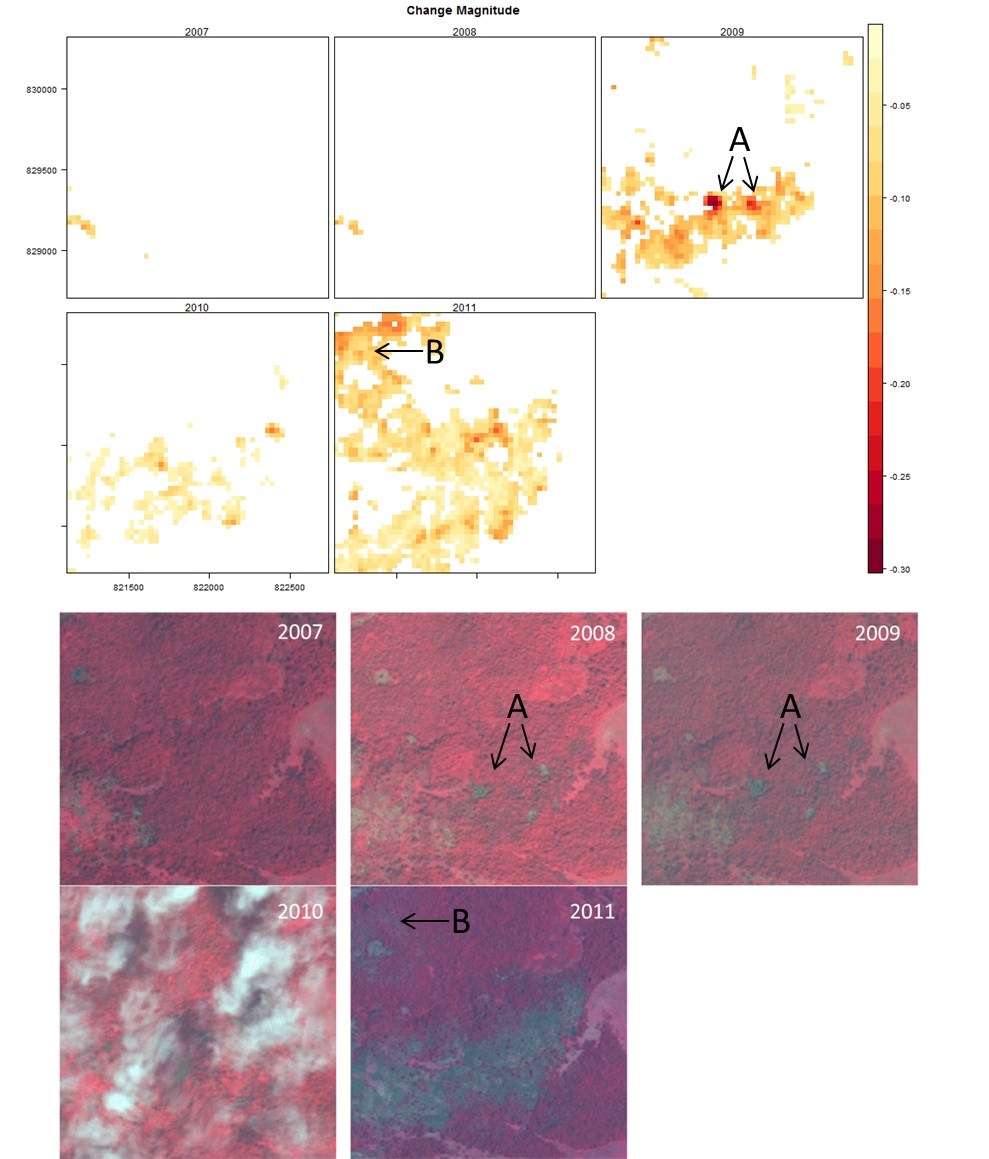