A time series of TerraSAR-X (TSX) data over Kapp-Linne at Svalbard is collected in the period 2010 – 2012 (see Fig.1) for studying annual variations in the backscatter and to assess the suitability of X-band data for mapping snow characteristics. The study area is located at Kapp Linne, Svalbard (78.0°N, 13.7°E) and consists of a periglacial landscape including an up to 3 km wide strandflat along the western coastline and mountains ranging up to 600 to 800 masl. with several smaller glaciers. The backscatter signature shows strong sensitivity to the snow properties, and a total dynamic range of 3-4 dB was observed in the NRCS between bare ground and snow-covered ground. A 1db difference was observed between thaw bare ground and frozen bare ground, indicating that the x-band signal penetrates into the ground when the ground freezes. A strong correlation between backscatter and ice depth is observed when the snow depth on top of the ice is small compared to the underlying ice depth. For one of the TSX acquisitions (31 March 2012), a field campaign was conducted to collect snow information such as depth, density, grain size and temperature for four transects. This TSX data set was used to test retrieval of snow water equivalent (SWE) using the SWE retrieval algorithm developed for the CoReH20 mission, but modified to only use one radar channel instead of four. The results of the SWE retrieval show that the retrieved SWE is in good agreement with the SWE estimated from the in-situ measurement (Fig.2). The SWE standard deviation and bias between TSX and field measurement are 0.07m and -0.03m with a correlation of 0.7. The in-situ measurement of grain size and snow temperature was used as input to the retrieval algorithm. The up to 30 cm ice layer on top of the soil (formed during a rain event in February 2012) needs to be accounted for properly in the retrieval of SWE analysis. Preliminary results show fair agreement for areas with dominant ice layer indicating that the underlying ice is infested with air bubbles that contribute to the backscattering. Areas with equally mixed snow and ice layers provide poorer results. More in depth modeling, taking into account a two layer model with more physical parameters for the two layers are expected to improve the results. TerraSAR X data has been acquired under TSX AO HYD0119. Figure 1:TerraSAR-X backscatter (NRCS) as function of month and day from April 2011 and until May 2012. , Figure 2:Profiles of TSX SWE, in-situ SWE, NRCS (including reference NRCS) along transect CC. The winter data is from 31 March 2012, while the reference (Fall) NRCS shown is from October 2011. The SWE profiles here are the total water equivalent of the snow+ice pack. 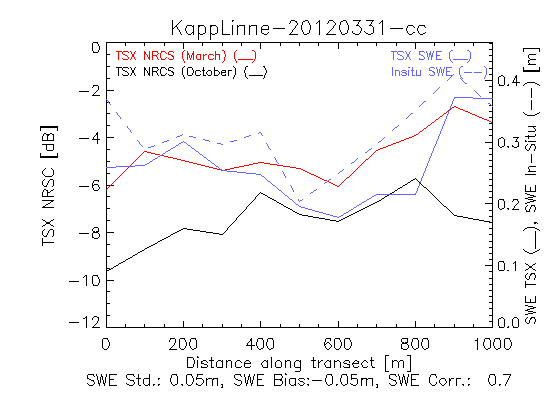