The paper proposed here consists in proximity experiments for measurements of continental water backscattering coefficient in KA Band and at incidences close to nadir. The study aims at collecting such data with associating roughness as well as wind measurements in the controlled environment of the wind tunnel facilities of MIO. To obtain a homogeneous incidence angle over the scene of interest, at constant wind strength, it was proposed to work in the near field of a reflector antenna (tubular zone). The measurements were done in two steps, first one with a system matched to outside measurements over rivers with a limited range of incidences, and a second one with a more specific system allowing a broader range of incidences and a larger footprint. The results obtained for the incoherent backscattering coefficient are consistent between the two campaigns and also with airborne measurements. As a function of growing wind speed, they first exhibit an increasing trend for low values of wind speed (less than approximately 2 m/s) up to a maximum value, after which they present a deceasing trend. In the first range of wind speed values, non monotonous variation of backscattering coefficient with incidence angle appear, whereas for the other the usual and expected behavior is observed.
The presentation will include several parts. First one will describe the experimental set-up which has been implemented and the method of measurement and derivation of sigma0, with particular emphasis on the calibration strategy in near field with a corner reflector. Second one will present the results obtained in the wind tunnel for both campaigns, emphasizing the influence of footprint change. Last part will present the conclusion about the method of measurement, the results obtained and the future prospects over real water continental surfaces 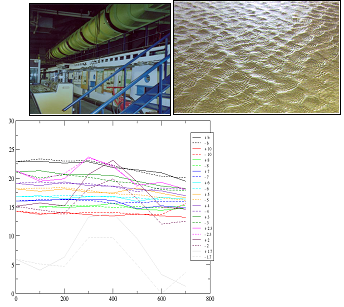