The PS-InSAR (Persistent Scatterer SAR Interferometry) method, GNSS networks and precise levellings provide a unique database to detect recent displacements of the Earth’s surface. In the Upper Rhine Graben area, data of all three measurement techniques have been collected at Geodetic Institute, Karlsruhe Institute of Technology, in order to gain detailed insight in the horizontal and vertical velocity field of the Upper Rhine Graben (URG).

As central and most prominent segment of the European Cenozoic rift system, the seismically and tectonically active Rhine Graben is of steady geo-scientific interest. In recent years, the URG is characterised by small tectonic movements (< 1mm/a), but an extensive utilization of geopotentials (mining, groundwater usage, oil extraction, geothermal energy, CO2 storage) inducing larger surface displacements. To assess the geohazards in the URG area, we aim to provide a map of the current 3d surface displacements with high precision and high spatial resolution.

The available data of the three geodetic techniques in the URG area are displayed in Fig. 1. Precise levellings have been carried out by the surveying authorities of Germany, France and Switzerland building a network of levelling lines. The levelling benchmarks have been measured up to 5 times since the end of the 19th century till nowadays. A kinematic network adjustment is applied on the levelling data, providing an accurate solution for vertical displacement rates at levelling benchmarks with accuracies of 0.2 to 0.4 mm/a.

For the GNSS part, a transnational network called GURN (GNSS Upper Rhine Graben Network) was established in 2008 in close cooperation with the Institute de Physique du Globe de Strasbourg (France). GURN actually consists of more than 80 permanently operating GNSS sites of Germany, France and Switzerland with a typical distance of 40 km (see Fig. 1). A continuous database exists since 2002. The GNSS analysis provides 3d displacements at all GURN sites in a high temporal resolution.

The biggest disadvantage of the levelling and GNSS database is the sparse spatial distribution of the measurement points. Therefore, PS-InSAR is used to fill gaps and to significantly increase the number of points within the levelling loops and between the GNSS sites. In two testing areas in the north and the south of the URG (see Fig. 1), ERS1/2 and Envisat data from ascending and descending orbits is processed using StaMPS (Stanford Method for Persistent Scatterers).

A joint interpretation of the three techniques is not straight forward since each method relies on its own characteristics (e.g., database, sampling interval, spatial resolution, reference frame and processing model). Problems are inherent especially to (i) major differences in the temporal and spatial resolution of the involved methods which require a careful test of suitable interpolation methods, (ii) different time-dependent reference systems, and (iii) changing geometry of the Persistent Scatterer networks as well as the imprecisely known dimensions and locations of the PS points. The presentation will compare the results for horizontal and vertical displacements in the URG using the three techniques and discuss our strategy to consistently link the different observation methods in a multi-techniques approach. 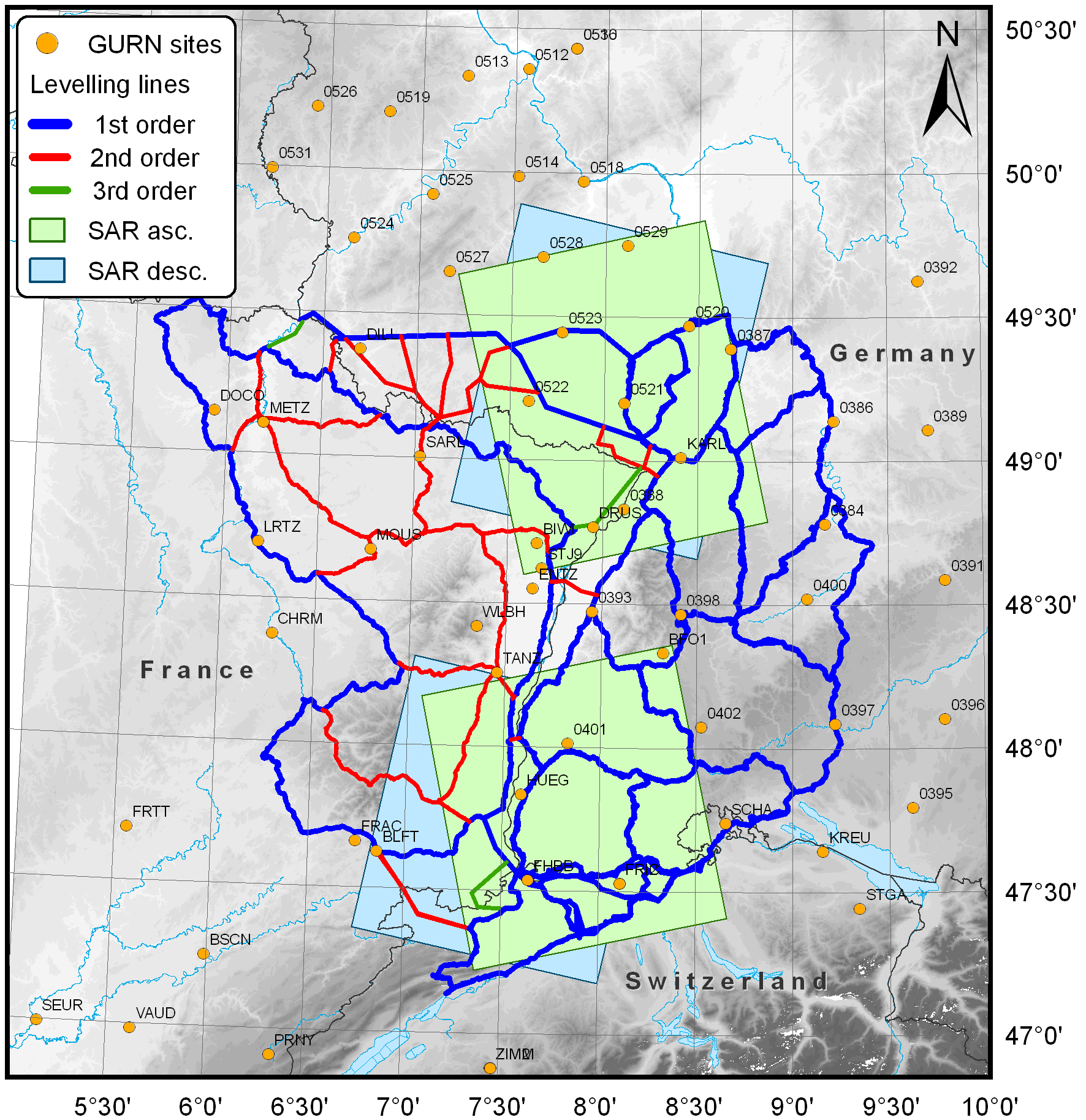