The quantification of the spatial and temporal variability in hydrological and land surface states is of interest in different disciplines, such as agriculture, hydrology, meteorology and climatology. Interconnections and feedbacks between hydrological variables and regional hydrometeorology have resulted in the increased use of satellite remote sensing to determine the partitioning of available energy into sensible and latent heat fluxes at the earth's surface.
This partitioning depends for a large part on the composition of the observed area, specifically, whether this unit area is vegetated or bare. Since the earth's surface at most scales is heterogeneous, thermal-based energy balance models that distinguish soil/substrate and vegetation contributions to the radiative temperature and radiation/turbulent fluxes, have proven to be reliable.
During the last few decades these physically based models have evolved into an operational mode. Despite being physically based, still a number of assumptions and tabulated input parameters are used. These are not easy available or measured at an operational basis, nor is their influence on the obtained model output always known over a variety of landcover units.
Generally such models use so-called resistance schemes where the turbulent sensible(latent) heat fluxes are determined by a temperature (vapor pressure) difference between the overlaying air and the surface, either soil or canopy, over an aerodynamic resistance to heat (vapor) transport. The soil surface temperature, TS, and canopy temperature, TC, generally are derived from a single observation of directional radiometric temperature, TRD, in combination with an estimate of the fractional vegetation cover, FVC. This directional radiometric temperature is calculated from the brightness temperature, which is directly measured by the radiometer, thereby assuming a single directional emissivity that represents the combined soil and vegetation.
Deriving the soil and canopy component temperatures from the FVC and a single TRD observation invokes an iteration process, where it is uncertain whether the proper solution is obtained. When TRD observations under multiple angles are available the component temperatures can be derived directly. In addition, the assumption of a single directional emissivity that represents the combined soil and vegetation when deriving the TRD is questionable. Using soil and canopy component emissivities would be physically more realistic. Moreover, the component emissivities will also directly influence the estimation of the longwave radiation, which determines for a considerable part the available energy. The objective of the present study is to test how a physically based retrieval of the thermal surface states, soil and canopy temperature and soil and canopy emissivity, influences estimates of radiation and turbulent fluxes in two-source energy balance modeling.
This objective was addressed in the 'Regional Experiments For Land-atmosphere Exchanges' training (REFLEX), sponsored by EUFAR and EUROSPEC, carried out between 18 and 28 July 2012 at the well-known Las Tiesas agricultural test farm in Barrax (Spain). The purpose of the campaign was two-fold, namely first to train students in airborne and field data collection for land-atmosphere exchanges, and second to collect a unique data set of hyper-spectral, multiangular airborne data in conjunction with multi-scale land-atmosphere exchange measurements in the field. The airborne data acquisitions used here were conducted by the Spanish Instituto Nacional de Tecnica Aerospacial (INTA), operating their Airborne Hyperspectral Scanner (AHS) during three consecutive surveys to catch a full diurnal cycle. The first survey took place on the 25th of July 2012 and started at 08:40 UTC, a second survey started at 21:30 UTC the same day, whereas a third survey was flown on the 26th of July starting again at 08:40 UTC. The flightplan was designed such that during each survey the area of interest was covered with multiple viewing angles, see Figure 1, at different resolutions. Hyperspectral imagery in the visible, near infrared and thermal infrared wavelength regions were obtained from an altitude of 2743 meter, resulting in a spatial resolution of 6.7 meter, and at an altitude of 1707 meter, resulting in a spatial resolution of 4.3 meter.
Near-ground hyperspectral radiometric measurements, covering the solar to the thermal infrared range, were carried out for calibration and validation purposes at selected sites with homogeneous landcover/landuse, see Figure 2.The landcover classes covered comprised of grass, wheat stubble, maize, camelina, forest nursery, open water, bare soil and vineyard.
In addition, measurements of boundary layer heat and moisture fluxes, carbon fluxes, high resolution (in a spectral, spatial and temporal sense) thermal radiation and other relevant meteorological variables were carried out during the campaign. The main objective of the collection of this type of data was to model the heat, water and carbon transfer inside and above the canopy as well as above bare soil. Therefore, three fluxtowers were installed; one over the camelina, one over the vineyard and another over the reforestation area. In addition a Large Aperture Scintillometer (LAS) was installed over a wheatstubble field. See Figure 2 for an overview.
Results will be shown for the four validation sites, demonstrating the effect of implementing a physically based retrieval of the thermal surface states, soil and canopy temperature and soil and canopy emissivity, on the estimates of radiation and turbulent fluxes. 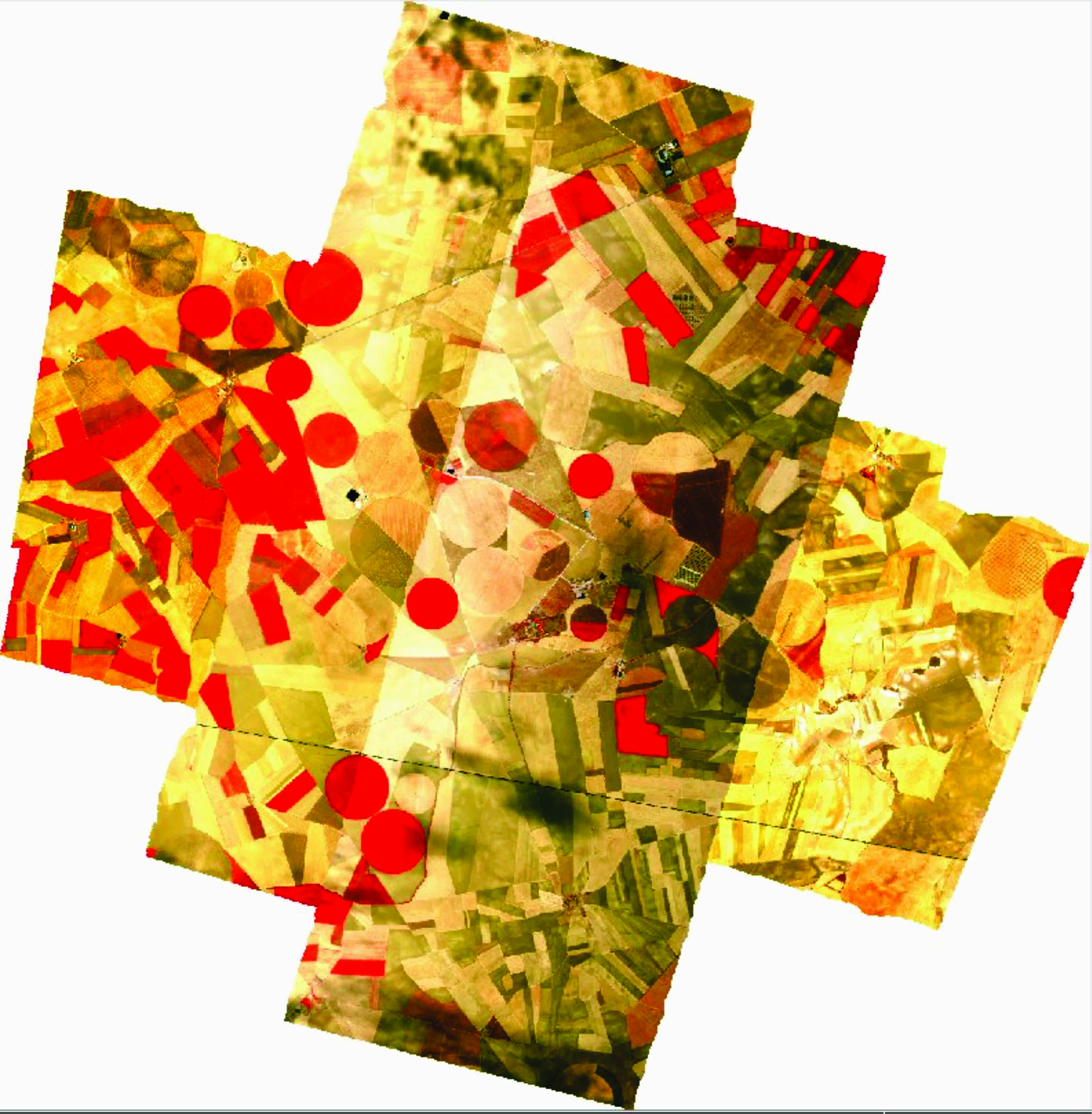 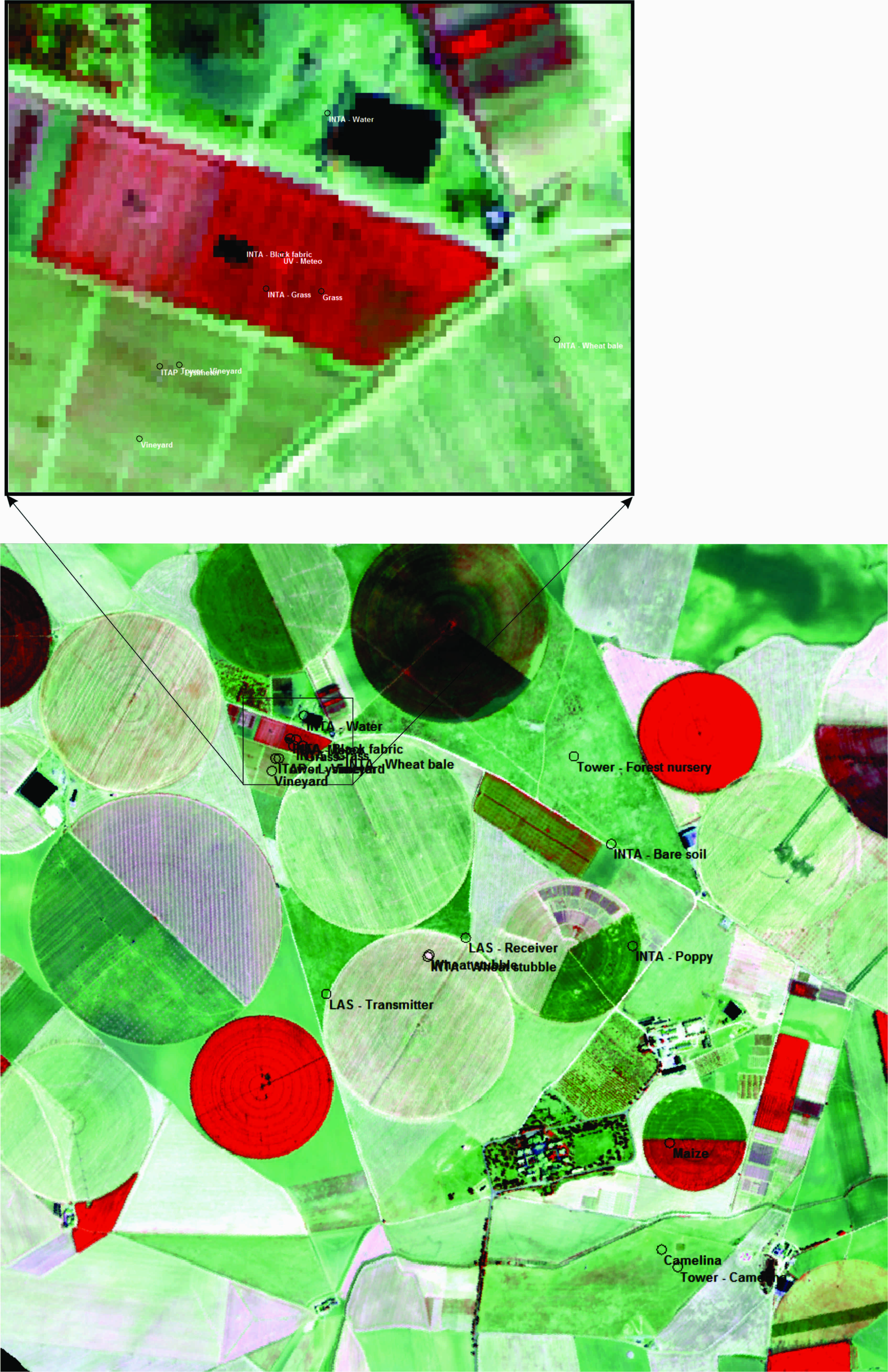