Large icebergs (>6km) are routinely tracked and monitored using scatterometer data, but the distribution of smaller icebergs (<2-3km) is still largely unknown because of the difficulties of an operational detection. Tournadre et al (2008) showed that small icebergs can be detected using 20 Hz altimeter waveforms. The method also allows the estimate of the iceberg surface and of the distribution of the ice volume on a monthly basis. The method was developed for the Jason-1 altimeter and the processing of the whole archive (2002-2010) showed the possibility of the description of the small iceberg distribution at unprecedented time and space resolutions. The ALTIBERG project funded by CNES aim at creatingi a small iceberg database covering the 1992-present using the waveform data archive of all past and present altimeter missions.
Compared to the Topex/Poseidon, Jason satellites the ESA satellites (ERS, ENVISAT and Cryosat) have a much higher inclination which allows a detection of icebergs at higher latitude which is of importance for the southern ocean. We present the specificities of the detection method for the ESA satellite as well the results of the analysis of the satellite archive with a focus on the high latitude distribution of icebergs.
The method of detection developed for Jason was restricted to open ocean data, first test on Envisat waveform data showed that the detection of iceberg can be possible within sea ice. A new detection algorithm adapted for sea ice is also presented
Concerning Cryosat, the processing of LRM waveform data is identical to the ENVISAT one and it has been included in the ALTIBERG project. However, the sensor is most of time in SAR mode over the iceberg regions (South Atlantic for example), we analyze the possible signature of icebergs in the SAR waveform data and present the first results of the detection for a limited data set. 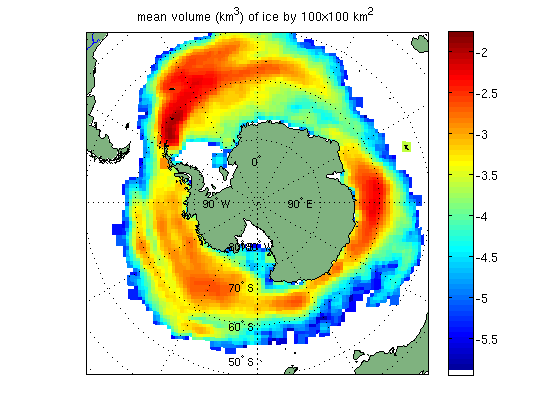