Forest cover data has become a fundamental data source for various fields of scientific research and political decision making. The accurate assessment of forest cover and forest cover changes for large regions based on satellite imagery is a challenging task, and an efficient classification method is needed to ensure consistent results.

The objectives of this study are to produce detailed and precise forest/land cover information at a continental scale, i.e. for the whole Russian Federation, in a timely manner based on Landsat imagery for three epochs (around year 1990, around 2000 and around 2010).

The methodological developments of an optimal operational classification strategy will be described in this paper. This study focuses on a sample of 20 km x 20 km size units located at full degree Latitude and Longitude confluence point. A sub sample of the full population of the systematic Latitude and Longitude confluence points was designed through a random selection preserving an equal probability for all latitudes. This led to the selection of a statistically valid sample of 500 sites for which Landsat satellite imagery was selected and pre-processed. While for the 'epochs' 2000 and 2010 the coverage by ETM+ imagery from Landsat 7 (2000) and by TM imagery from Landsat 5 (2010) is almost complete, Landsat imagery for the 1990 epoch (TM imagery from Landsat 4 and 5) suffers from the lack of acquisitions in the archives over Eastern Siberia. We developed a robust semi-automated approach for analyzing and classifying such a large amount of Landsat imagery. This study highlights the advantages of using a semi-automated segmentation based classification approach (using E-Cognition software). The imagery for the three epochs is stacked within one single file which is then used as input for an unsupervised spectral raster classification and for fine-scale segmentation. The outputs of these two independent steps (unsupervised raster classification and vector segmentation) are then combined and automatically pre-labeled from spectral signature database. The last step consists in the verification and correction of the class labels through visual interpretation. This method has been shown to significantly reduce the time needed for expert interpretation and allows increasing the information content of the forest cover maps. The final forest cover maps include eight forest cover types and a total of 13 land cover classes. Comparison with existing products, such as the TerraNorte land cover map of Russia, shows that our automated approach allows reaching an accurate identification of the forest and other land cover types in boreal environment. This detailed information is intended to be useful as input layer for land cover monitoring at continental scale, for mapping and estimating carbon stocks if forests and for carbon cycle models. The approach is flexible to incorporate imagery from other similar optical sensors, in particular imagery from the forthcoming Sentinel-2 satellites which, within the Sentinel series, will constitute the core European satellite capacity in next few years with a foreseen ''free and open'' data access. 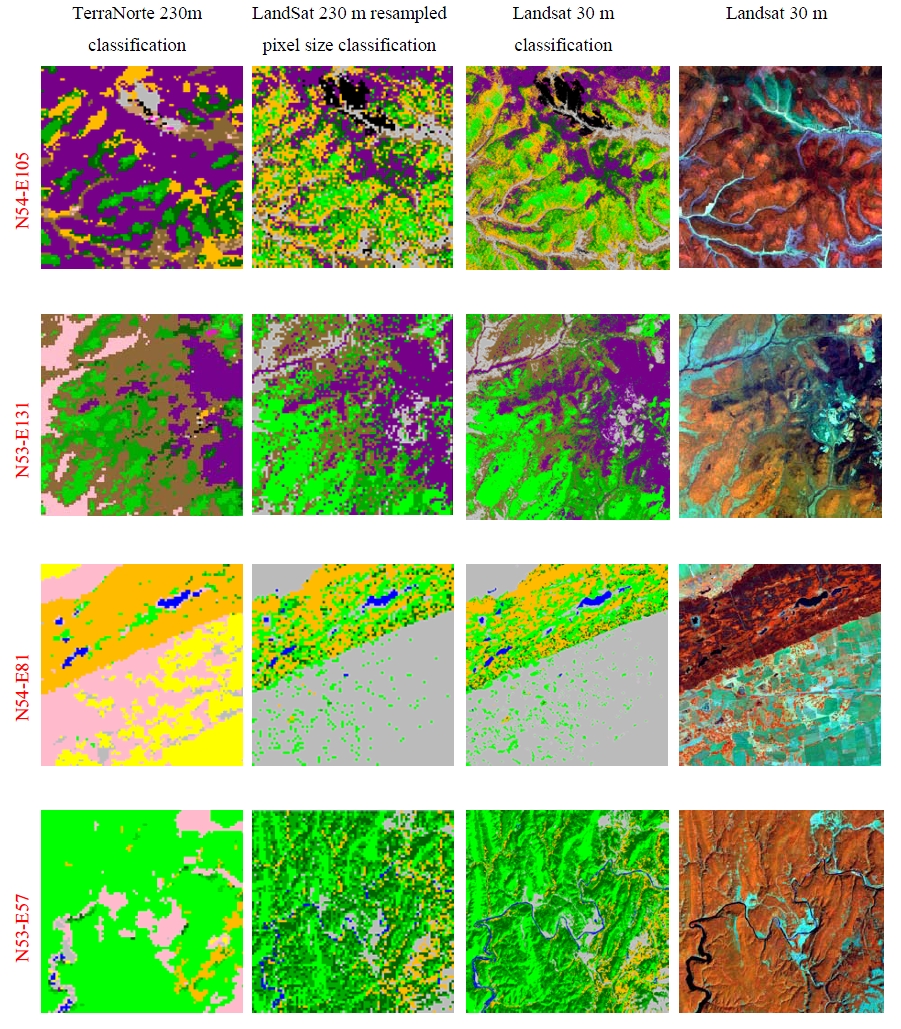