1. INTRODUCTION
Landslides and subsidence phenomena threaten a large part of both developed and developing countries, often resulting in high socio-economic impacts on the affected communities. In such a context, the risk management plays a significant role, by focusing on defining appropriate prevention and mitigation strategies. To this aim, a deep understanding of the kinematics ground deformation is needed and can be effectively reached if long-term monitoring data are available. Furthermore, the complexity of the problem is such that it cannot be tackled (and solved) at an individual, site specific scale, or using a single technique or methodology, but should be approached only through the integration of data and information taken at different scales.
In this context, the FP7-EU DORIS project is aimed at improving the understanding of the complex phenomena that cause ground deformation by properly integrating satellite and ground-based measurements, in order to foster the ability of Environmental and Civil Protection authorities to manage the risks posed by ground deformations.
Within DORIS, Differential SAR Interferometry (DInSAR) technique plays a key role, thanks to its capability to investigate the spatial and temporal behaviour of ground deformation induced by landslides and subsidence phenomena. DInSAR is a remote sensing technique that uses the phase difference (interferogram) between SAR data pairs, relevant to the same area, acquired at different times from sufficiently close flight tracks, in order to produce spatially dense deformation maps with millimetric accuracy.
In this work, we investigate the impact of the current SAR sensor scenario on landslides and subsidence mapping and we deeply exploit the capability of the existing SAR systems to improve the knowledge of the kinematics of investigated phenomena. To this aim, we focus on the efficient exploitation of the huge C-band ERS-1/2 and ENVISAT data archive for detailed back-analysis and on the mapping capabilities at very high resolution, both in time and space, offered by the new generation X-Band SAR constellations, including COSMO-SkyMed and TerraSAR-X systems. The presented results are relevant to some test sites, characterized by different ground deformation phenomena, representing a wide range of physiographical and environmental settings, and including a large variety of ground deformations for which the service is designed: i) Umbria (Central Italy); ii) Messina (Southern Italy); iii) Dunaszekcso, Rácalmás and Hollóháza (Hungary); iv) Silesian Coal Basin (Poland); v) Tramuntana Range (Mallorca, Spain); vi) St. Moritz and Zermatt (Switzerland).

2. RESULTS
In this section, the main results achieved in some of the areas investigated within DORIS are presented and discussed. The aim of the DORIS project is twofold: firstly, we focus on the use of the large archives of ERS-1/2 and ENVISAT images for detailed back-analyses of ground deformations covering almost 20 years; secondly, we analyze the impact of higher resolutions guaranteed by COSMO-SkyMed and TerraSAR-X sensors on the detection, mapping and monitoring of surface deformation. One of the selected test sites is relevant to the Ivancich landslide, located within the Assisi municipality, Umbria region (Central Italy). We have collected 91 ERS-1/2 and 39 ENVISAT SAR images covering the time period from April 1992 to November 2010, and 39 COSMO-SkyMed (CSK) images taken in the 26-month period between December 2009 and February 2012. The two SAR datasets have been processed by using the SBAS-DInSAR technique (Bonano et al., 2012), that is particularly suited for detecting and measuring non-linear deformation phenomena, such as landslides and ground subsidence. The achieved results demonstrate: (i) the effectiveness of the combined ERS-1/2 & ENVISAT analysis to study the long-term (almost 20 years) pattern of deformation induced by landslides phenomena, and (ii) the significant improvement of the mapping and monitoring capabilities of ground deformation obtained through the use of high resolution X-band SAR sensors (Fig. 1), that provide more insights on the landslide kinematics.
Another significant test site investigated within DORIS is Zermatt, in the Swiss Alps. From the panoramic view point offered by the Gornergrat peak, in the late afternoon of 19 September 2012, the Gamma Portable Radar Interferometer (GPRI) (Werner et al., 2008) measured surface deformation relevant to (from left to right in Fig. 2) Grenzgletscher, Schw&aumlrzegletscher and Breithorngletscher. In a period of 1 hour and 33 minutes, the GPRI performed 32 successive scans, with an interval of 3 minutes between each scan. Analysis of the images allowed determining the average displacement rate, expressed in Fig. 2 by the daily rate of movement. The red colours identify surface movements, clearly visible for the Schw&aumlrzegletscher. 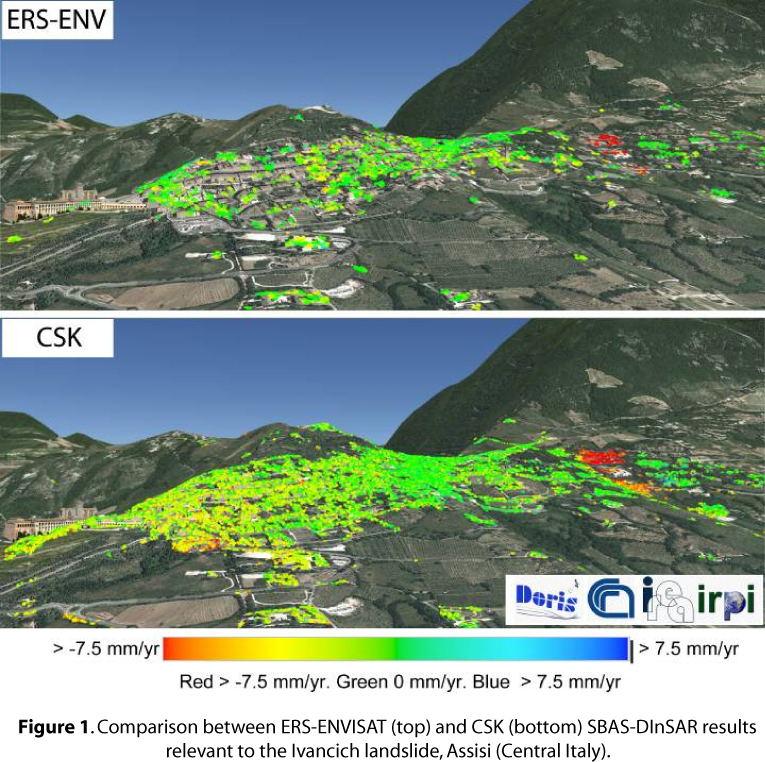 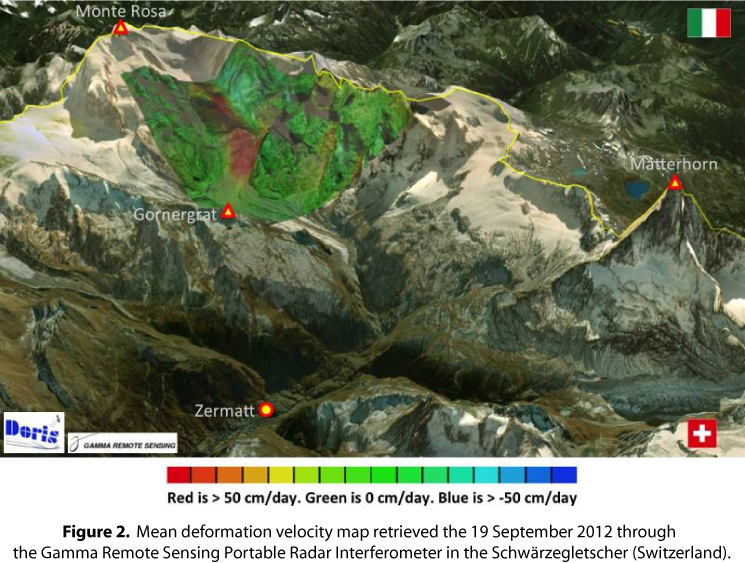