The TOPS (Terrain Observation by Progressive Scan) mode has been selected as the default mode of operation for the Sentinel-1 satellite. This new mode provides a wide coverage and circumvents the limitations of ScanSAR, namely a strong azimuth dependence of the SNR due to the ScanSAR burst operation and the antenna pattern. The TOPS mode was first demonstrated with the TerraSAR-X satellite in 2008 [Meta] and the TOPS interferometric performance analysis including the coregistration of TOPS image pairs was discussed in [Prats]. The investigations concerning interferometry showed that the TOPS mode requires a very precise coregistration approach in order to avoid phase jumps at burst borders. For the Sentinel-1 satellite, this requirement is in the order of 0.001 TOPS image pixels. Such a stringent requirement comes from the high Doppler variation within a burst. In [Prats] a new approach was suggested and validated with TSX TOPS data, which achieved the required performance and allowed the generation of accurate TOPS interferograms and subsidence maps. However, the suggested approach assumes a stationary scene, or negligible azimuth motion. In such a case, only a constant azimuth offset needs to be estimated to calibrate orbital accuracy limitation, which can be done very accurately by exploiting the overlap region between adjacent bursts.
This paper concerns the analysis of coregistration issues typical for the TOPS acquisition mode with special emphasis on non-stationary scenes, including motion components in azimuth direction, as are encountered when mapping glacier flows and tectonic drift. Displacements in along-track between the acquisitions together with the TOPS azimuth signal properties lead to unexpected behavior of the interferometric phase or may require improved coregistration estimates. In this case adaptive coregistration estimates are required. The accuracy limitations of coherent cross-correlation and spectral diversity methods will be compared to the performance to be expected from speckle tracking or incoherent cross-correlation [Bamler], [De Zan]. The performance will be quantified as a function of coherence for the experimental TerraSAR-X and the operational Sentinel-1 TOPS acquisition modes.
In addition, the coregistration uncertainty can also be mapped into the uncertainty of the retrieved line-of-sight displacement as a function of azimuth position within the TOPS burst. In Figure 1 this relationship is depicted for TerraSAR-X, where a coregistration error of 80 cm corresponding to 0.05 resolution cells has been assumed. The performance of one equivalent ScanSAR burst with much smaller extension is displayed for comparison. The uncertainty (potential error) gets larger towards the burst edges. The effect is present also in the ScanSAR case but with reduced magnitude. Therefore, but also because in the past mostly stripmap data were used for DInSAR applications, up to now, the limited coregistration accuracy was not affecting the retrieval of the relevant geo-physical parameters. For TOPS data we thus propose an additional quality measure indicating the trustworthiness of the LOS measurement as a function of azimuth position, coherence and block size used for coregistration estimates.

For glacier surface velocity measurements in Antarctica one has to consider displacements of many hundreds of meters per year [Rignot]. This corresponds to several tenths of meters per Sentinel-1 orbit cycle (12 days). It is clear that such large displacements are difficult to map by DInSAR as they are larger than one TOPS resolution cell. Thus current techniques are based on speckle tracking in order to estimate the displacements. Typical for the TOPS signal is the variable azimuth bandwidth support within a burst which originates from the steering of the antenna in along-track. Therefore, if a target has moved in the azimuth direction between the two acquisitions, it will have a different azimuth spectral support, i.e. it will be mapped by partly different steering angles in the two data sets, hence introducing noise in the estimation of the shifts. The larger the induced azimuth spectral shift, the larger is the amount of spectral decorrelation. This limit will be quantified for the Sentinel-1 TOPS modes. (Note that a similar effect is also present in ScanSAR interferometry). In order to minimize the effects of spectral decorrelation an iterative approach is possible: After a first estimation of the azimuth shift, the amount of azimuth spectral shift can be computed in order to perform a spectral filter and then perform an improved estimation of the shifts. The above TOPS signal properties and performance figures will be validated with experimental TOPS data acquired by TerraSAR-X on the Lambert glacier in Antarctica, exemplifying the potential of the Sentinel-1 TOPS interferometric wide-swath mode data for the mapping of the highly dynamic polar regions.
References: 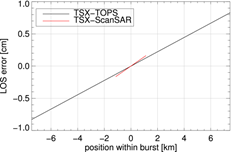