1.Introduction
The tropical forests are involved in many ecological processes and they play a major role in the global biogeochemical cycles, including the carbon cycle. They present the major part of the world forest biomass and their changes in biomass by deforestation and/or by forest regeneration affect strongly the terrestrial carbon budget. To measure with accuracy tropical forest biomass and its temporal change is one of the objectives of the BIOMASS mission [1], a candidate for the European Space Agency 7th Earth Explorer Mission.
The possible retrieval algorithms currently developed for BIOMASS are based on the use of backscatter measurements derived from intensity, polarimetry , interferometry or tomography. However, these quantities are subject to evolution with the life cycle and the meteorological conditions at very different time scales, ranging from a few minutes to days, months... with the possibility that their changes may affect the inversion algorithms. A ground experiment has been set up to follow systematically these evolutions over a tropical forest in French Guiana, delivering P band polarimetric, interferometric impulse responses and 2D (range/height) imaging every 15 minutes.
In this paper the results of temporal backscattering and temporal coherence are presented in the case of canopy only and full forest during 3 months of rainy season for the backscattering signal and three months of rainy and dry period for the temporal coherence. The relation between intensity evolution, biophysical parameters and meteorological events is analyzed in detail for diurnal cycles, in which possible rain has a very important role, as well as long term in which similar values are reached for both seasons.

2.Temporal Variation of Polarimetric Backscattering
For more information about the TropiScat experiment, see [2] and [3]. For each acquisition we obtain a range backscattering profile. The radiometric signal is computed by averaging the range profile in distance, time and several antenna pairs successively, and normalizing results according to range, polarisation and antenna gain.
Fig 1 shows the backscattering radiometric signal (HH, HV and VV) in the rainy period and over three months (from 26/12/2011 to 11/03/2012). This figure also reports the rain fall and the soil moisture at 10 cm depth. We denote a stable level for the VV polarization whereas HH and HV increase slowly along this rainy period. A variation of grossly 1 dB or less is observed globally in this period in the HH and HV polarization in relation with the global increase in soil moisture. In the one can observe a daily cycle of 1 dB variation between night and day. This variation is probably due to the variation of the permittivity in the trees (trunks and branches). One can see in that during the short slots without rain, the decrease in intensity for all polarisations is related with a local decrease in soil moisture. More globally, intensities variations follow soil moisture ones.

3.Temporal Decorrelation Analysis
In the preparation of the BIOMASS mission, it is envisaged to characterize forest using techniques based on a repeat pass mode (POLINSAR or tomography) for which the temporal decorrelation has to be small enough. The temporal decorrelation is analysed here using three months of data in the rainy period and three months in the dry one. The temporal coherence was computed for a range corresponding to the canopy and the full forest and for up to about 30 days time interval.
Fig. 3 and Fig. 4 display the temporal decorrelation respectively for the canopy and the full forest at 6:00 a.m in the rainy and dry period. Fig. 3 displays a level of coherence greater than 0.8 up to 20 days and the HV coherence is slightly higher then the HH and VV coherence. Fig. 4 displays as well a coherence greater than 0.8 up to 20 days for HH, HV and VV polarization in the dry period. In the rainy period, one observe a smaller coherence especially for the first days and after 20 days the HH and VV polarisation become in the same order. Actually, at 60 days intervals, the rainy period coherence is greater than the dry period one. These results are compatible with those found during the TropiSAR campaign [4].

4.Synthesis and Conclusion
Over one full year including dry and rainy seasons, very valuable data have acquired and processed. Both polarimetric intensity and temporal coherence evolution at all scales of time could be evaluated for further system studies. In the full paper and in the presentation, these results will be analyzed more thoroughly to show the influence of geophysical parameters during both seasons. More generally, the concept of tower radar monitoring will be analyzed and assessed. 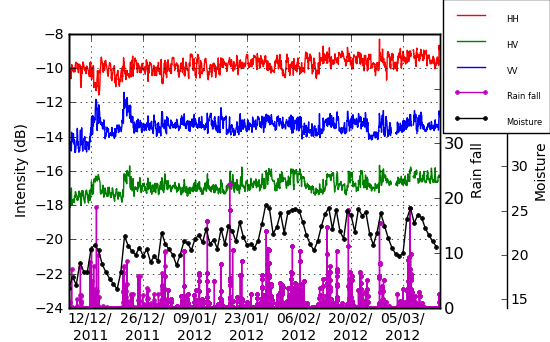 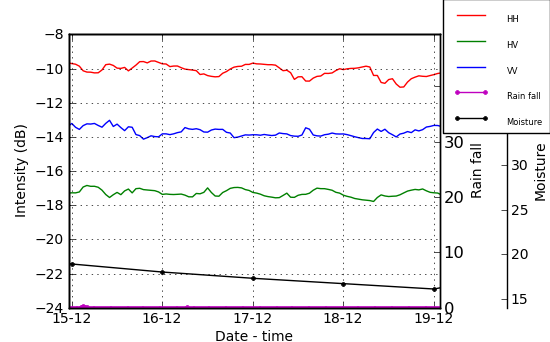 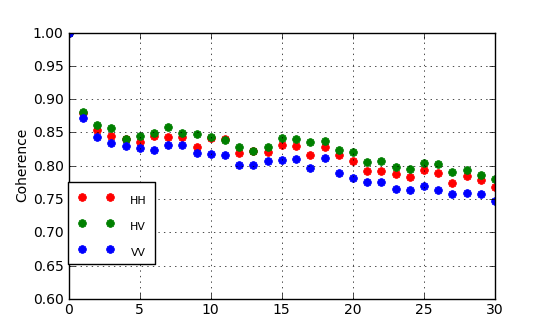 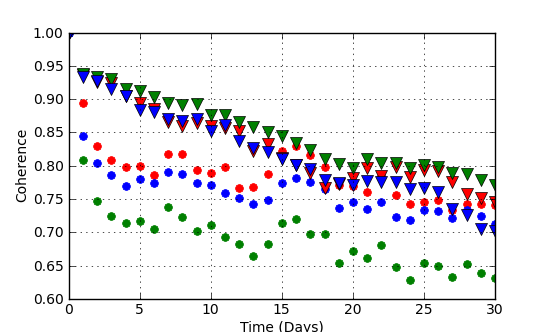