To date, there are no widely accepted and operational approaches for monitoring forest degradation by remote sensing. In most studies, medium resolution sensors such as Landsat (30m spatial resolution) have been used so far to address this issue but many small-size degradation features (such as small-scale non-mechanized logging) cannot be detected at that spatial resolution.

For REDD+, a simple, repeatable and robust method using higher spatial resolution data with high temporal resolution seems the best way forward for a detailed mapping of forest degradation.
In this paper, we present a methodology to detect, map and quantify forest degradation processes and area of changes (e.g. forest canopy gaps, small clearings, logging roads) from optical satellite imagery at high spatial resolution (<10m). The method is based on semi-automated, object-oriented image classification. Multi-temporal analysis is carried out (i) to detect and quantify areas where changes occurred, and (ii) to identify different intensities of degradation.

The approach is based on multi-date segmentation, which creates multi-date objects grouping pixels that are spatially, spectrally and temporally similar (Figure 1). Step 1 consists of delineating "large objects", using spectral, scale and compactness parameters. In step 2, for each image individually, small patches of bare soil (canopy gaps, narrow logging roads) are delineated as "small objects" within the large objects of step 1. Figure 1c and 1d illustrate the two levels of image segmentation for t1 and t2 respectively. Step 3 consists of tabulating the amount of bare soil at each time step within the large objects. Five levels of forest degradation are defined for each object according to the percentage difference of bare soil between t1 and t2 (Figure 1e). Large objects whose percentage of bare soil is higher in t1 as compared to t2 are classified as regeneration. Large t2 objects for which the threshold of tree cover falls below the level defined for forest (10 or 30 percent) should be considered as deforested areas even if in the legend they are integrated in degradation level 5. The approach was applied on two case studies in Central Africa, through two related projects: (1) REDDiness which aimed at evaluating the potential of satellite imagery to assess forest degradation in two small study sites, one in Gabon and one in the Republic of Congo; (2) EO4REDD which focuses on the development of a robust, affordable and reliable forest degradation monitoring method for the Mai Ndombe region in the Democratic Republic of Congo. 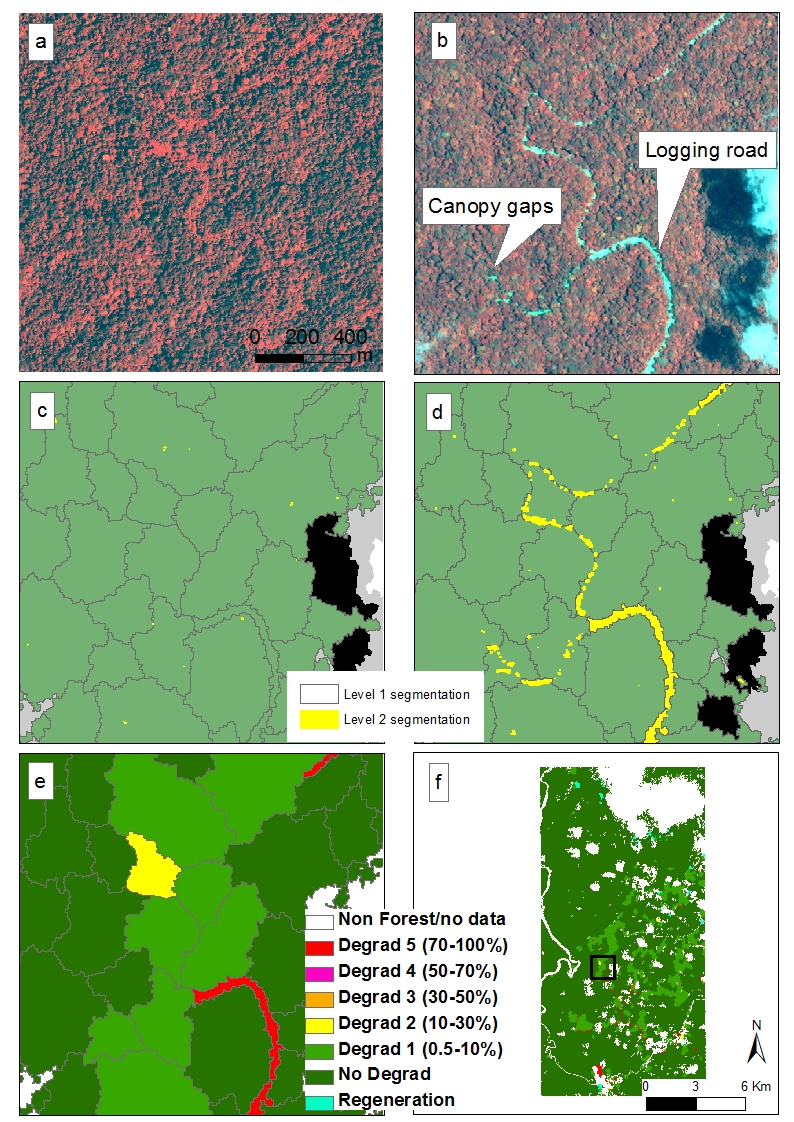