The advent of satellite data products for the tropospheric column of nitrogen dioxide has provided an independent source of information to monitor nitrogen dioxide distributions. Recently, a number of studies have used OMI-NO2 data to investigate the trends of nitrogen dioxide across Europe for the period 2005-2010. Although approaches used in these studies differ they show a consistent picture with decreasing trends of 3-6% in most of western Europe, whereas reductions in eastern Europe were not observed or insignificant. How to translate these trends to information on (a country's) emission remains an important issue. The sensitivity of the OMI instrument to different sectors as well as the total emission may differ regionally as the dominating source sectors and NOx lifetime vary across Europe. Furthermore, the sensitivity may change in time as significant emission reductions are anticipated to occur in particular sectors, such as the introduction of new vehicle technology, whereas emissions in other sectors may increase or remain constant. Hence, to interpret the concentration trends it is important to know the sensitivity of the satellite in relation to the total NOx emission.

We have successfully used the LOTOS-EUROS chemistry transport model equipped with a source apportionment module to investigate the sensitivity of the OMI instrument to emission sources. The most important contribution (~35 %) in western Europe is made by road transport. Across large parts of Germany and France this percentage was calculate to be around 50%. Off-road transport and industrial combustion contribute 10-15 % each across most of continental Europe. In eastern Europe power plants are an important contributor to the modeled OMI-NO2 column and of comparable magnitude as road transport. These results may enhance the interpretation of the OMI satellite data. For instance, a number of studies have shown large reductions (~10 %/yr) in NO2 columns across northern Spain and have argued that these reductions might be caused by technological measures in power plants. Our simulations clearly illustrate the dominant source contribution (60-80%) of the power sector in this region, supporting the analysis that the power sector is the only sector able to cause such large reductions in NO2 columns.

To answer the question if the OMI-NO2 trends can be translated directly into emission changes, we assessed the anticipated signal of OMI-NO2 between 2020 and 2005. For this purpose we ran a 2020 emission scenario with 2005 meteorology and sampled at OMI-overpass. The results indicated that for many countries in Europe it is indeed possible to translate the trend in column densities directly into an emission trend. However, for medium and small sized coastal countries the contribution of the increasing shipping emissions in adjacent sea areas may mask a significant part of the national emission reductions. Hence, for these countries the trends in NO2 columns should be interpreted as a minimum. 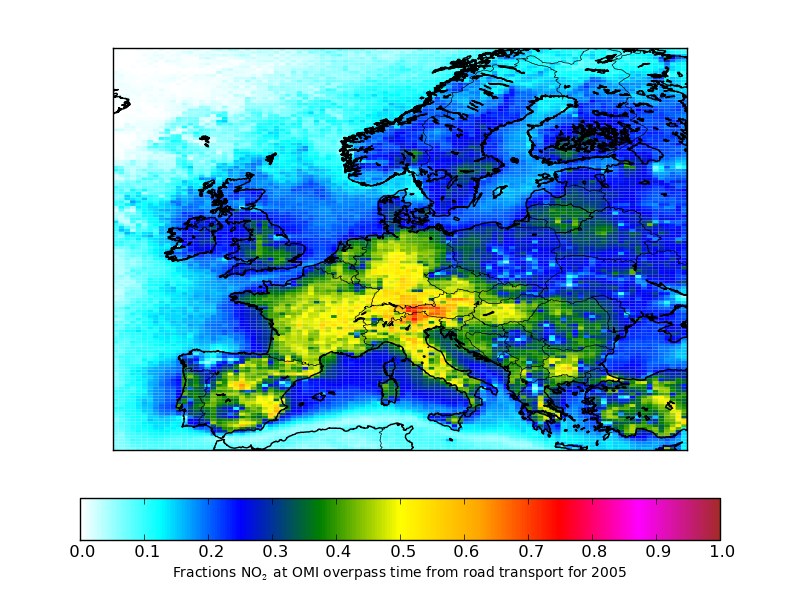