1. Introduction Global climate change is of increasing interest both for public opinion and scientific community, due to its implications on global economy and human communities, as proved by numerous disasters occurred worldwide in recent years cause by severe weather events. In this perspective models for analysis and weather forecasting acquire importance; unfortunately the same require high spatial resolution data to be assimilated. A recent possibility is represented by Spaceborne Synthetic Aperture Radar (SAR) operating at X-Band, that allow high resolution also in remote or orographic areas where other measurements are not available. Several authors have reported the sensitivity of X-SAR amplitude and phase signals to precipitation events (e.g. [Marzano etal., 2009], [Danklmayer etal., 2009], [Baldini etal., 2010]). X-SAR potentialities have been attested also by a model approach [Marzano etal., 2012]. Indeed, the exploitation of X-SAR observations for quantitative precipitation retrieval is still at an early stage and far from being fully assessed and demonstrated. Stimulating perspectives are offered by the recent deployment of the COSMO-SKyMed satellite constellation and of and TanDEM-X/TerraSAR-X satellites, respectively by Italian Space Agency (ASI) and by Deutsches zentrum fur Luft und Raumfahrt (DLR); actually a similar presence of spaceborne X-SARs allows to partially overcome the reduced duty cycle of these instruments, one of their principal limitation to natural events observation. In this work two COSMO-SkyMed (CSK) case studies are analyzed respect their precipitation signatures. The first case is relative to Hurricane "Irene" event, occurred in Eastern United States on late August 2011. CSK X-SAR images are compared with respect to concurrent ground-based S-band NEXRAD Weather Radar (WR) reflectivities. The second case is relative to a severe precipitation weather event, occurred in northwestern Italy on November 3-8, 2011. In this case CSK X-SAR data have been compared with WR reflectivity data obtained by the Italian Radar National Mosaic. A new methodology is applied to both case study to detect the areas affected by intense precipitation and distinguish them from flood ones; actually both areas are characterized by intense negative Normalized Radar Cross Section (NRCS) and can be confused. This methodology requires ancillary data, such as land cover maps, a digital elevation model (DEM) and spaceborne high resolution optical data (e.g. LandSAT) and as final products allows to obtain atmospheric effects free NRCSs, more precise flood maps and finally precipitations maps. In this work precipitation maps will be derived by the two study cases; the same will be compared to precipitation maps obtained by corresponding WR measurements.
2. Available data Hurricane "Irene" was observed by a CSK X-SAR through a ScanSAR-Wide acquisition in HH (copolar horizontal) polarization, on August 27, 2011 between 22:54:25 and 22:56:37 UTC. The acquisition covers an area along the United State northeast coast, where we have selected a portion centered at about 38.25/39.25 °N, -76.25/-74.75 °E. For the selected event only data acquired in KDOX (Dover, DE, 38.82 °N, -75.44 °E) WR site were available with an acceptable time gap (acquisition time 22:57:19 UTC). The second case study was foresighted as a weather hazard. CSK was programmed to continuously monitor the Northwestern Italy event starting from November 4, 2011 until November 8, 2011. Within the available CSK data, we have selected a Stripmap image acquired on November 5, 2011 05:15 UTC, centered at about 43.47/44.30 °N, 7.39/ 8.16 °E. The concurrent WR imagery has been retrieved from the Italian National Radar Mosaic data. CSK data have been calibrated and geocoded by means of the ENVI/SARSCAPE® software to derive the backscattering coefficient σSAR. For this purpose, we have used the Shuttle Radar Topography Mission (SRTM) Digital Elevation Model (DEM). Besides the DEM, as ancillary data we have also used Land Cover maps derived from the European Corine Land Cover project and by the US National Land Cover Database. 3.Analysis of X-SAR precipitatio signatures and rainfall estimation CSK copolar horizontally-polarized backscattering coefficient σSAR [dB] and WR copolar horizontally-polarized reflectivities Z [dBZ] have been co-registered to verify the presence of atmospheric signatures within the X-SAR retrievals. In this respect, X-SAR detection of rainfall is affected by the correct knowledge of the surface backscattering, especially for light precipitation, whereas WR retrievals may be affected by anomalous propagation and obstacle obstructions. Figure 1 shows a qualitative analysis of both case studies. It is evident a good agreement between WR strong reflectivity and X-SAR backscattering attenuation, nevertheless the last can be due to water surfaces, flood areas or snow coverage. The core of the proposed methodology allows to discriminate precipitation signatures respect to other targets within the X-SAR image and consequently estimate the attenuation due to atmospheric effects [Pulvirenti etal., 2013].
Respect rainfall estimation, WR reflectivities Z "mm6/m3] can be "converted" into rain rate [mm/h] using for example the standard Marshall-Palmer Z-R relation R = (Z/200)1/1.6, whereas X-SAR data can be processed by applying the statistical semi-empirical rain retrieval algorithm described in [Marzano etal., 2011]. This method requires the estimation of the X-SAR surface response in absence of precipitation, expressed by σ0. In this work we have developed a new technique where the X-SAR σ0 is estimated by the combining information from the local DEM and land-cover map taking into account the CSK acquisition geometry and local incidence angle. Figure 2 and 3 show the X-SAR precipitation estimation for both case study, compared respect the WR rainfall measurements. 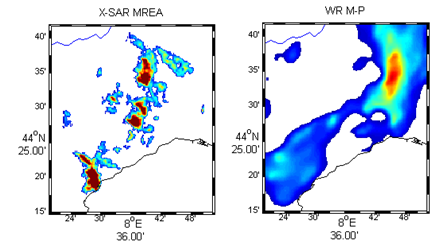 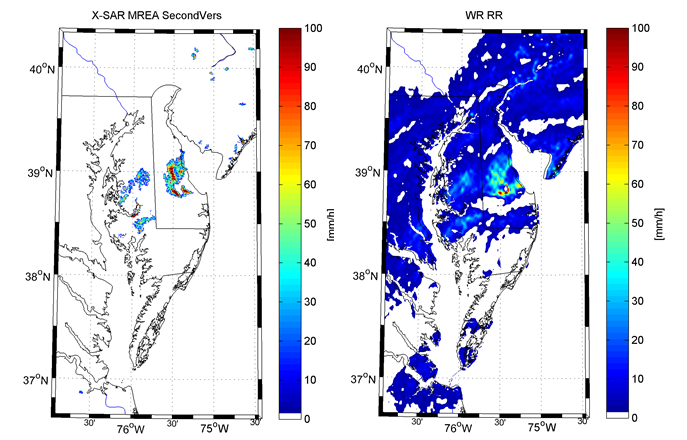