1.INTRODUCTION
Tropical forests present the major part of the world forest biomass and their changes in biomass by deforestation and/or by forest regeneration affect strongly the terrestrial carbon budget. To measure with accuracy tropical forest biomass and its temporal change is one of the objectives of the BIOMASS mission [1], a candidate for the European Space Agency 7th Earth Explorer Mission. It is well known that low frequency radars may furnish lots of characteristics of forests, and in particular P-band (435 MHz) is often proposed for biomass estimation [2] and BIOMASS will be the first spaceborne Synthetic Aperture Radar (SAR) operating at P-band. Retrieval of bio-physical parameters of forests with remote sensing is nowadays a challenge. In particular, the biomass of the canopy, soil and branches moisture contents are three parameters of interest. To finely study the mechanisms of radar backscattering at P-band and to link the measurements to biophysical characteristics, sensitivity studies with simulated data are usually performed. In this paper, an original approach of experimental sensitivity studies is presented. Its goal is to better understand the influence of trunks, branches and soil moisture content with several measurements of the same site over time; and the influence of biomass, slope and forest height with measurements of several sites on a short period of time. Three proximity experiments at different scales were conducted: TREESCAT, a system that measures the daily evolution of a cedar radar response; TROPISCAT, a system that measures the daily evolution of a plot of tropical forest [3]; and a campaign to acquire vertical tomograms over several plots of pine forest with various configurations.

2.THE TREESCAT EXPERIMENT
This first proximity experiment consists in the observation of one tree with an emitter-receiver located on the roof of ONERA laboratory in Toulouse, South-West of France. This emitter-receiver is remotely controlled via Ethernet, and then a fine temporal survey of the radiometry and the phase scattered by a tree was performed (Figure 1). 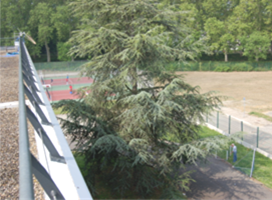 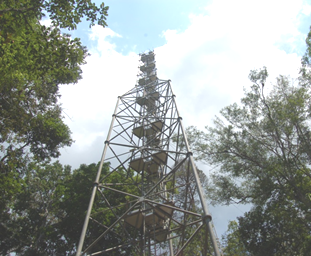 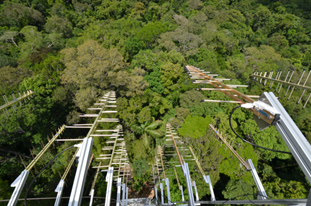 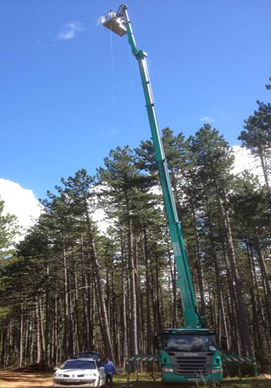 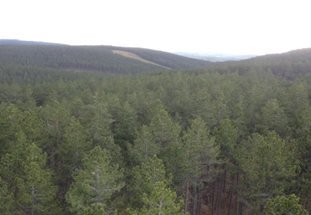